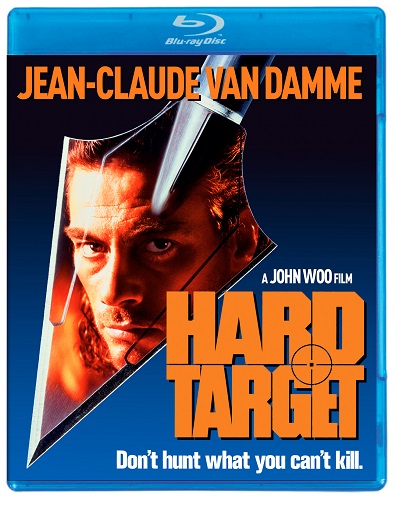 After a string of action masterpieces—which included A Better Tomorrow (1986), The Killer (1989), and Hard Boiled (1992)—made him a critical darling and the international representative of Hong Kong’s heroic bloodshed genre of cinema, it was inevitable that director John Woo would receive offers from Hollywood. Hard Target (1993) would be Woo’s first American film and, in spite of its well-chronicled production issues, it’s an action classic and one of star Jean-Claude Van Damme’s best—even if it’s not the undiluted John Woo actioner it might have been, had the studio, its leading man, and the MPAA not meddled in what ultimately became Hard Target’s final cut.

Hard Target was actually Woo’s second choice for his first Hollywood project, behind an Oliver Stone-produced script that he eventually turned down because they tried to pay him as a first-time director rather than an award-winning, 25-year veteran of the HK film industry. Instead he opted for Hard Target, liking Chuck Pfarrer’s script and producers Jim Jacks and Sam Raimi, who visited him in Hong Kong in order to woo him into signing on. (Universal had insisted on Raimi being involved so that he could serve as a backup director, ready to step in and take over should the language barrier and pressures of working in Hollywood prove too much the Chinese filmmaker.) Van Damme’s heavy Belgian accent reminded Woo of French star Alain Delon—one of his favorite actors—and the director looked forward to working with someone who was already an established action star.

Hard Target was the umpteenth cinematic spin on Richard Connell’s short story “The Most Dangerous Game” and the second set in New Orleans, following 1986’s Avenging Force, with Michael Dudikoff and Steve James. Lance Henriksen plays the villainous Emil Fouchon with slimy panache; he’s the head of an evil, international business organization that helps rich, bored wackos hunt down-on-their-luck human beings for fun and games. (If the movies have taught us anything, it’s that wealthy weirdos don’t have anything better to spend their millions on than hunting homeless veterans for sport.) Fouchon has set up shop in the Big Easy, choosing the city for its abundance of prey and a police force that has relatively little interest in investigating all of the gigantic gunfights that break out in the center of their town.

Having not heard from her estranged father in some time, Natasha Binder (Witchblade’s Yancy Butler) heads to Nawlins to look for him. Along the way she recruits the help of sensitive Cajun ass-kicker Chance Boudreaux (Jean-Claude Van Damme), who quickly finds himself to be the villainous Fouchon’s latest—and most dangerous—target. (His “hard” target, if you will.)

A marriage of Woo’s bullet ballet style with ‘90s Hollywood action excess and Van Damme’s signature high-kicks, Hard Target showcases gleeful insanity from beginning to end. This is a film where Van Damme surfs on the back of a motorcycle while shooting a pistol and delivers a knock-out punch to a snake! And we haven’t even gotten to the movie’s funniest character: Chance’s moonshinin’, bayou-dwellin’ Uncle Douvee, played by Wilford Brimley. (Consider yourself lucky if you can understand every third sentence he mumbles.) Watching Wilford Brimley ride away from a slow-motion explosion on horseback while waving a bow-and-arrow overhead has to be one of the best movie shots of the 1990s.

The movie’s bonkers finale, set in a warehouse packed with creepy old Mardi Gras floats, is where the movie comes closest in style to Woo’s Hong Kong classics. We get all of the director’s trademarks, from nonstop slow-motion, guns that fire infinite bullets while the person wielding them slides effortlessly across a flat surface (these same guns only need reloaded at the exact moment the person you’re trying to kill also needs to reload, for quiet and convenient exchange of tough-guy barbs), pigeons and/or doves taking flight, and everyone constantly just running and shooting at each other with multiple firearms at once while glass shatters and shit explodes around them. It’s silly, it’s unbelievable—and it’s just wonderful, wonderful, wonderful.

It’s a bit nutty to think that both the 97-minute theatrical version and the 100-minute international cut (included on this disc) are somehow toned down. Woo’s first crack at the movie was longer than two hours; his rough workprint—which has been floating among fans in ugly VHS dubs for two decades—ran for 116 minutes. After Hollywood asked for a John Woo movie and the director delivered what was most definitely “a John Woo movie,” seemingly everyone with any sway over the project appears to have stepped in to mold it into something else entirely. Van Damme supposedly had the villains’ scenes trimmed to make his hero a bigger focus of the story; the studio had action scenes re-shot to replace gunplay with high-kicks, in hopes that the movie might better appeal to their star’s fans; most notably, the MPAA demanded that much of the action be dialed back for the movie to receive an ‘R’ instead of an NC-17 rating. In the workprint there are many more graphic close-ups of squibs exploding, while every character seems to get shot with twice as many bullets; it’s overkill, maybe, but it shouldn’t have been a surprise to anyone who actually watched Woo’s prior films.

Kino Lorber’s special edition Blu-ray release of Hard Target looks fantastic, with the new restoration adding brighter colors and far more background detail than seen even on prior Blu-ray releases. (We wish we’d been able to review Kino’s 4K UHD version of the release, if only to see if we could differentiate where the real hair ended in Van Damme’s mullet and the extensions began.) There’s a nice selection of all-new bonus features, including some great interviews. There’s a quick chat with John Woo himself, who talks about the frustrations he had working in Hollywood for the first time, but also some of the surprises. (In Hong Kong, his producers thought he was crazy for using so many dangerous explosions—but when he got to Hollywood, he was actually encouraged to add more of them.) Lance Henriksen talks about some of the elements he brought to his character, including requesting that he use the Thompson Contender single-shot pistol, which provides a few memorable reload moments in the film—and makes his the only character who doesn’t fire a dozen rapid-fire rounds every time he points his gun. Yancy Butler shares a funny story involving Wilfred Brimley causing trouble on set with an electronic fart machine, and stunt coordinator Billy Burton walks listeners through a few of the movie’s most dangerous-looking shots.

This is a great release—one that Hard Target fans have long been waiting for. Considering that it was simultaneously released on 4K UHD and Blu-ray, it’s not going to be topped unless someone can land the elusive rights to include the workprint, or better elements turn up for some of the excised violence.

Chris Pine-starrer 'Hell or High Water' will be adapted into a TV Show; details inside

Chris Pine-starrer 'Hell or High Water' will be adapted into a TV Show; details inside