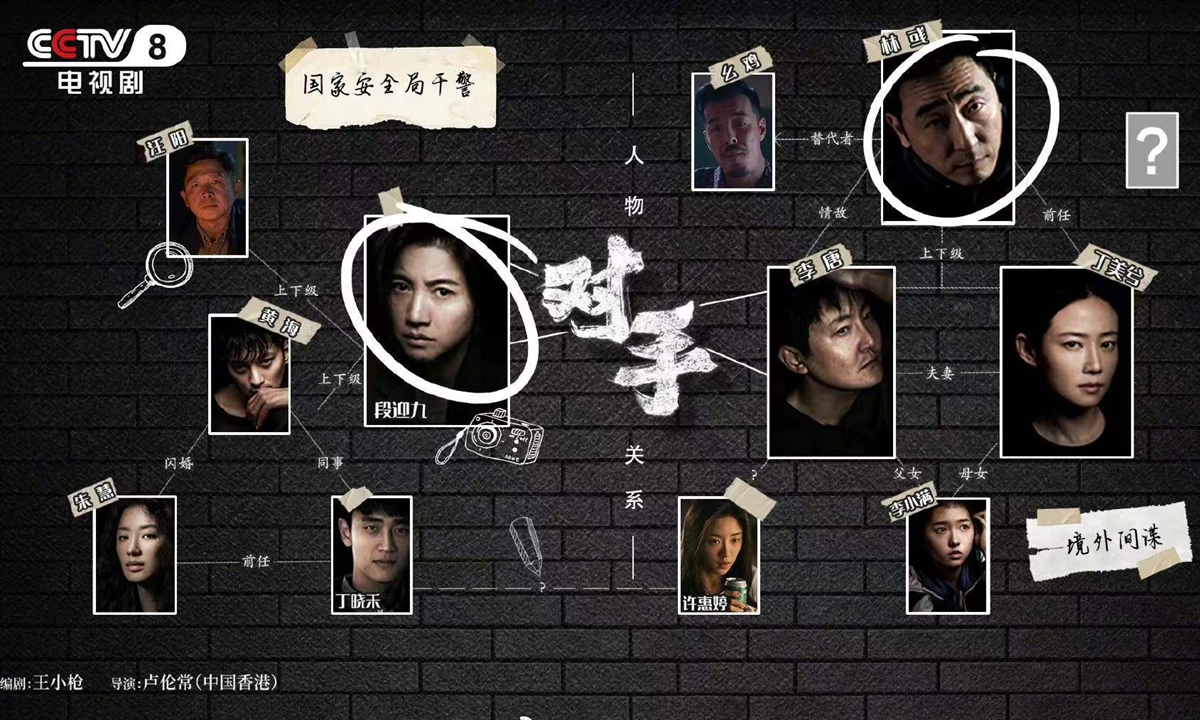 The modern counter-espionage TV series, Enemy, has hit Chinese social media, giving the public a glimpse of the always-secret espionage sector and serving as a good lesson for ordinary people to raise their vigilance against spies, especially those from the island of Taiwan.

The TV series that has  dominated the prime-time slot on China Central Television 8 since December 16, tells how national security police detect and counter spies. After airing for days, Enemy was dubbed by netizens as “the best yearly homemade TV drama” and ranks  No. 2 in audience rating among domestic TV dramas.

The key things that make the drama stand out are its unprecedented exposure of spying cases relating to the island of Taiwan, and a story based in Xiamen and Taiwan, industry observers noted.

The leading actors of the drama are a middle-aged couple from overseas. Although they do not directly say they come from the Taiwan, their code names are Taoyuan and Hualien, both place names in the island.

The wife, named Ding Meixi, said that she was born in East China’s Fujian Province and moved to Taiwan with her aunt when she was a teenager.

In the drama, the spy couple has lived in Xiazhou, which audience members think is Xiamen in the real world, for nearly two decades. The wife pretends to be a teacher and the husband a taxi driver. They have a teenage daughter who is not aware of her parents’ real identities.

The family seems to live a normal life, but in the dark, they collect and steal information and then send it overseas. Once, they tried to kidnap a missile expert, who is also a general of the People’s Liberation Army.

The wife also tries to lure male targets and threaten them with sex videos to obtain information.

Li Baiyang, an assistant researcher and post-doctoral student at the School of Information Management of Wuhan University, told the Global Times that the TV series, which decodes espionage, implies there is a serious espionage campaign targeting the Chinese mainland from the island of Taiwan, and it plays an important role in raising public vigilance toward spies.

Beyond traditional fields such as the military, politics and the economy, spies from the island have also penetrated cyberspace. For instance, they gang up online to spread fake news. They also conduct their espionage campaigns by luring students coming from the mainland with sex, and even through business activities such as colluding with officials while they’re disguised as businessmen, Li noted.

As the hatchet man of the US, Taiwan uses espionage activities to please the US to get support for “Taiwan independence,” Li noted.

With the intensified espionage campaign from the island of Taiwan, which is becoming more and more secretive and destructive with the help of the internet, Li said the mainland has been ramping up efforts to counter these activities.

But espionage awareness in Chinese society is still weak, which makes the broadcast of the TV series very necessary.