Like most viral internet obsessions heralded as evidence of the zeitgeist, Kristen Roupenian’s “Cat Person” was more cultural litmus test than anything else.

The short story, published in The New Yorker during the winter of 2017, was met with almost vertiginous levels of fanfare and debate. On one side: applause for Roupenian’s blunt portrayal of 21st-century dating, which mirrored the confessional verve of a New York Magazine “Sex Diaries” column. On the other: eye-rolls directed at the hype machine, criticisms aimed at the writer’s style, complaints filed from offended parties.

Bound to fire up the discourse.

The story, a provocative tale of a curdling romance between a college sophomore and a man more than a decade her senior, was obscured in the cacophony of the discourse. The conversation — on the merits of the story, on why it elicited such a strong reaction, on what it says about communication — spiraled, and the plot was lost. I suspect the same fate will befall Susanna Fogel’s high-wire adaptation, which premiered at this year’s Sundance and will undoubtedly find a captive, devoted audience.

Cat Person — directed by Fogel (co-writer on Booksmart) and written by Michelle Ashford (Masters of Sex) — knows its reputation and capitalizes on this self-awareness. Fogel and Ashford tease out the latent horror in the story. The nightmares of dating, the fear of intimacy and the anxiety of trusting potential suitors become strange sounds, shadowy figures and visions of inescapable situations. It’s a liberating approach that the film gets close to nervously sabotaging. Like a helicopter parent with access to Find My Friends, Cat Person can’t help but keep checking in.

This distrust in viewers isn’t initially obvious. Cat Person opens by embracing its source material and flaunting its genre aspirations. Margot (Emilia Jones) meets Robert (Nicholas Braun) at the town movie theater, where she tends the concession stand. Their initial interaction echoes the shy coolness of the short story: Margot makes fun of Robert for buying Red Vines and he jokes that she’s bad at her job.

The film strikes out on its own when Margot happens upon a stray dog in front of her dorm building. She tries to sneak the canine into her room. But the floor is hawkishly surveilled by a condescending resident advisor, who, upon hearing Margot shuffling through the hall, reminds our protagonist that animals aren’t allowed. That night, Margot dreams about the dog howling outside her window and then mauling her R.A. This scene sets the mood, establishing the film’s intent to play with the line between real and unreal. Taking up the technique of recent social horror films — like Get Out and Promising Young Woman — Cat Person translates the terror of society’s issues into atmospheric dread.

At work the next night, Margot and Robert exchange numbers and begin their affair. They text everyday; some messages are more cringe-worthy than others. Margot’s friend, Tamara (the always exciting Geraldine Viswanathan), an outspoken feminist who moderates internet boards, encourages her to set boundaries early and often. Margot doesn’t listen. The more she talks to Robert, the more bifurcated her vision of him becomes: The man is at once a charmer and a potential murderer.

Scenes like the one where Robert drops off some food for Margot, who is working late in a campus lab, confirm this sense. The juvenescence of their relationship — confined mostly to texting — makes each interaction fraught with the danger of a fatal misstep. Small acts like how Robert hands her the treats or reaches for her arm activate Margot’s anxiety as she imagines him lunging at or attacking her. DP Manuel Billeter, boosted by composer Heather McIntosh, creates a visual language that moves easily between placidity and terror. Jones (CODA) and Braun (Succession) bolster the believability of these moments; their performances induce the appropriate levels of second-hand embarrassment.

Hovering around these taut interactions underscoring the failures and anxieties of cishet dating are the check-ins — the interludes that want to make sure we’re picking up what Fogel, Ashford and Roupenian are putting down. Monologues on ants given by Margot’s anthropology professor (a scene-stealing Isabella Rossellini) or fantasy therapy sessions with an unnamed analyst (Fred Melamed) loudly telegraph the stakes and too neatly package the themes. At their best, these are fun-to-indulge cameos; at their worst, they’re evidence of the filmmakers not fully trusting the viewer.

Roupenian’s story is most interesting when it exercises restraint and a comfort with ambiguity. The violence of socialized gender roles feeds on gray areas and rejection. After Margot ends the dalliance in the story, Robert’s initial sadness morphs and calcifies into an unsavory rage. He texts her again, each message more aggressive than the last until the story ends with him calling Margot a whore.

Cat Person effectively reproduces that scene and the ones leading up to it, but it doesn’t end there. A hair-raising third act adds an unusual coda — one that I, after only one viewing, am still processing. The relief, however, is in the filmmakers’ approach to these tense scenes: Fogel and Ashford loosen their grip, at last trusting us to sit in our discomfort, draw our own conclusions and sharpen our tools for the discourse. 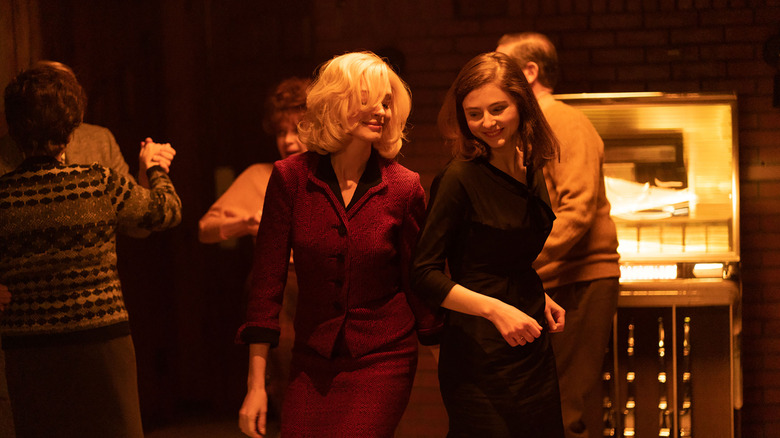 Anne Hathaway won an Oscar for her work in “Les Miserables,” but her performance in William Oldroyd’s “Eileen” may be the best of her career so far. The actress breezes into this movie as Dr. Rebecca Saint John, a confident, Harvard-educated psychologist who takes a job at a prison in a dreary Massachusetts beach town in the mid-1960s and befriends the title character, a drab, repressed young woman (played by “Last Night in Soho” star Thomasin McKenzie) who also works at the prison. Eileen is the movie’s protagonist, and she’s instantly smitten by Rebecca — partly because she’s the most exciting thing to disrupt Eileen’s dreary life in years, but partly because Rebecca actually sees Eileen when all of her other co-workers seem to look straight through her. A blossoming friendship soon develops into a possible romance, and for a long while, it seems as if you may have seen this before.

Todd Haynes’ “Carol” casts a shadow over this movie, with the similarities of a plain but pretty young lady falling for a gorgeous, confident older woman during Christmastime in New England in a period piece. If “Eileen” was content to be merely a riff on “Carol,” it would have been an effective one. But the film separates itself by taking a dark, unexpected turn late in its runtime that had me pumping my fist in the theater at its sheer audacity. Suddenly, what seems like an enjoyable but familiar narrative feels as if it’s been electrified, like the movie has suddenly been struck by lightning. Oldroyd lulled me into a false sense of expectation and then dropped a bomb into his movie that completely shifted the ground under my feet. I can’t remember the last time I was so energized by a surprise.

Ari Wegner’s Cinematography Is Out Of This World 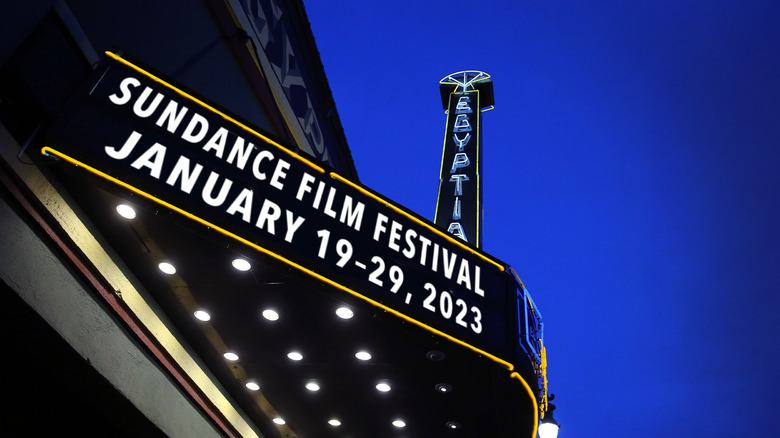 Eileen’s home life isn’t ideal for a 24-year-old. She left college to come home and take care of her mom a few years earlier, but after she died, Eileen is stuck dealing with her unhinged father (Shea Whigham, dependable as always), a war veteran and ex-cop who spends his days drinking himself into a stupor and waving his gun at neighbors and children. Eileen takes care of him, getting his booze and trying to keep him out of trouble, but he treats her like crap, constantly dressing her down. He goads her into trying to kill him, just like a local boy about her age who stabbed his own father to death, and Eileen truly thinks about it — there are several shocking sequences where she shoots him (or herself) out of nowhere, only to be quickly revealed as hyper-realistic daydreams.

Enter Rebecca Saint John, who’s instantly objectified by her male co-workers in classic 1960s fashion. “She may be easy on the eyes,” the warden says to the staff when introducing Rebecca to the group, “but I assure you, she’s very smart.” (Again, she’s in the room when he says this.) As some of the only female employees at the prison, Eileen and Rebecca quickly bond over some shared worldviews, and Rebecca soon asks her enthralled, mousy co-worker to meet her for a drink at a local bar. There, the two hit the dance floor — first as a way to mess with some ogling locals, but then, as they dance, their bond begins to solidify into something more than friendship. Ari Wegner, who recently shot “The Power of the Dog” and “Zola” and who also shot Oldroyd’s 2016 movie “Lady Macbeth” (which helped launch Florence Pugh to stardom), is back behind the camera here, and she crafts an exquisite-looking sequence outside in which the two women are bathed in the red neon light of the bar’s sign during a soft snowfall, as they lean against a brick wall, smoke cigarettes, and reveal more of themselves to each other. When Rebecca invites Eileen over to her home on Christmas Eve, the groundwork has been laid for them to take their relationship to the next level. And boy, do they — but not in the way you might expect.

Every Element Comes Together 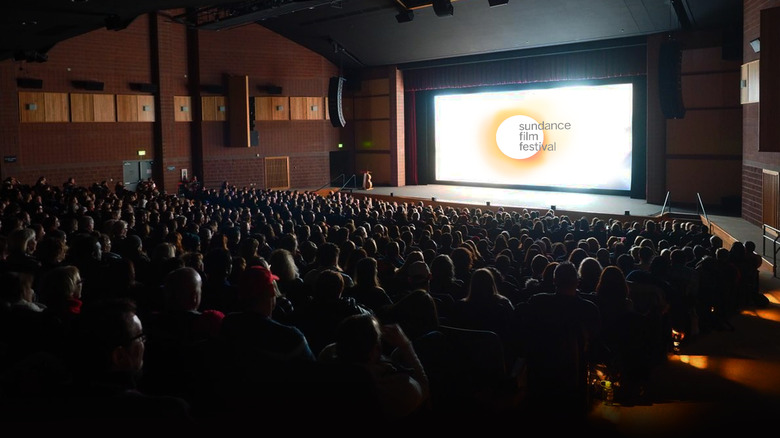 Barring her small supporting role in last year’s “Armageddon Time,” a case could be made that the last time Hathaway was in something truly great was “Interstellar” nearly a decade ago. Thankfully for all the Hatha-heads out there, she is absolutely extraordinary in “Eileen.” This feels like a role she was born to play; she exudes charisma and has both Eileen and the audience wrapped around her finger. McKenzie is wonderful as the wide-eyed protagonist, sucked into the gravitational pull of this magnetic new figure in her life. The two of them have killer chemistry playing kindred spirits in a world that frequently underestimates them.

This is the second movie I’ve seen at this year’s Sundance about a repressed young woman who’s mesmerized into a would-be romance with a charismatic older authority figure, and this is far and away the better of the two. Every element just clicks: Richard Reed Parry’s score is reminiscent of Nicholas Britell’s floaty score for “If Beale Street Could Talk,” another actor delivers an unbelievable monologue near the end that I won’t spoil here, and Hathaway picks up the movie and walks away with it, practically looking back over her shoulder and winking while she does it, as if to say, “Remember me? Well, I can do this now.” Be warned, though: While the first two-thirds are easy to watch, the movie’s third-act revelation dramatically changes the tenor and uncovers a dark, extremely f*****-up secret that you may wish had stayed buried.

Disturbing, stylish, and sexy, “Eileen” is the first great movie of 2023.

The post Eileen Review: Anne Hathaway Lights The Screen on Fire In This Surprising Stunner [Sundance] appeared first on /Film.