Tech billionaire Elon Musk often makes headlines about his comments and quirky tweets. Recently, he created a storm on the internet after he announced that he will be paying over US$11 billion in this year’s taxes. Now, the Tesla founder has said that Web 3 seemed more like a “marketing buzzword” than reality right now. Web3/ Web 3.0, is an idea for a new iteration of the internet that incorporates decentralisation of information.

“I’m not suggesting web3 is real – seems more marketing buzzword than reality right now – just wondering what the future will be like in 10, 20 or 30 years. 2051 sounds crazy futuristic!,” Musk wrote.

I’m not suggesting web3 is real – seems more marketing buzzword than reality right now – just wondering what the future will be like in 10, 20 or 30 years. 2051 sounds crazy futuristic!

At present, Web2.0 is operational which is more centralised and focused on user-created content. Web 3.0, in comparison, challenges the dominance of big corporations by giving ownership of data to all. On Tuesday, Musk also made a follow-up comment, jokingly asking people had seen the web3? “Has anyone seen web3? I can’t find it,’ he said.

His tweet also caught the attention of Twitter co-founder Jack Dorsey who quipped, “It’s somewhere between a and z”. To this, Musk replied, ‘ m something something.’ The fun conversation triggered a conversation on the microblogging website. 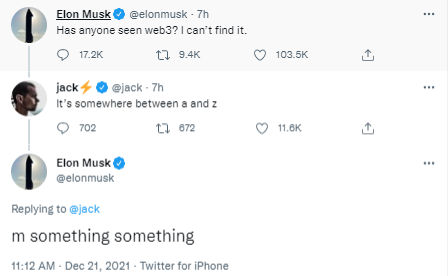 Commenting on the same, one user wrote, “C’mon, Professor Musk. You know the answer already. Web3 does exist but will be invisible + won’t mean anything until a nation-like union style platform emerges with a clear purpose and a trustworthy leader who does not aim to be a dictator on blockchain”. “Im building web 4.0 ı will share asap,” a second user wrote. Meanwhile, the post also caught the eyeballs of Shibetoshi Nakamoto who wrote “elon and jack banter is the actual best thing on twitter

Web3 is like ghost stories of Bhangarh fort, Rajasthan, India. No one has seen it but yeah we don’t visit it post 9 pm.

Leonard Maltin grieves the closure of his Marie Callender's