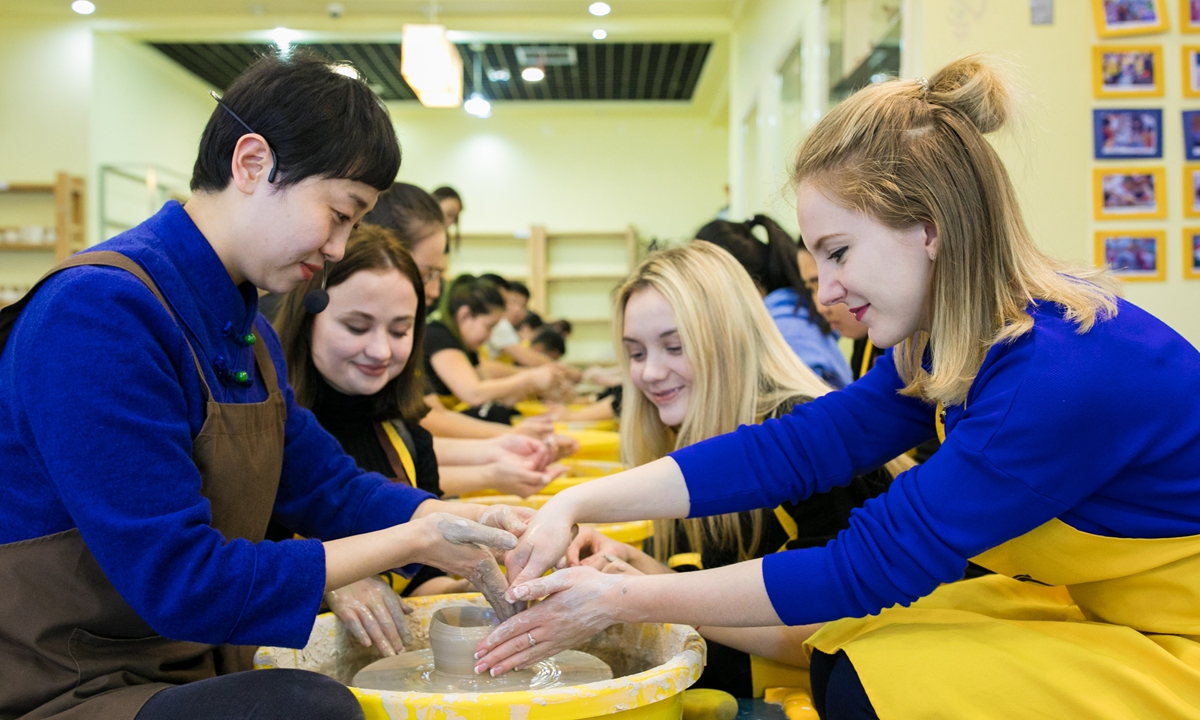 In a rapidly changing world as the COVID-19 pandemic ravaged the world in 2021, more Chinese people consider China-Russia and China-EU relations more important than China-US ties. It was also the first time in 15 years that China-US ties did not top the list of the important bilateral relations in the Global Times annual survey. Despite US-led Western small cliques continue to contain China on multiple fronts such as trade, high-tech, human rights and ideologies, the majority of the Chinese people surveyed held optimistic views over the future geopolitical environment while many showed less approval or even disapproval of the US-led Western democracy, the survey showed.

This is the first time the Global Times survey showed that people believe China-Russia relations are the most important bilateral ties, ahead of China-EU and China-US relations, since the research center launched the annual poll in 2006.

When the year 2021 witnessed a consolidated friendship between China and Russia following frequent interactions between top leaders of the two countries, and extension of the mutual support on issues such as fighting the US-led Western hegemony and coordinating stances on regional security, it was also the year witnessing that US-defined democracy declined, and even collapsed. About 66 percent of the respondents surveyed said they disapproved of the US-style democracy or their approval has declined, among which, 23.5 percent of people surveyed said their disapproval has been further intensified. 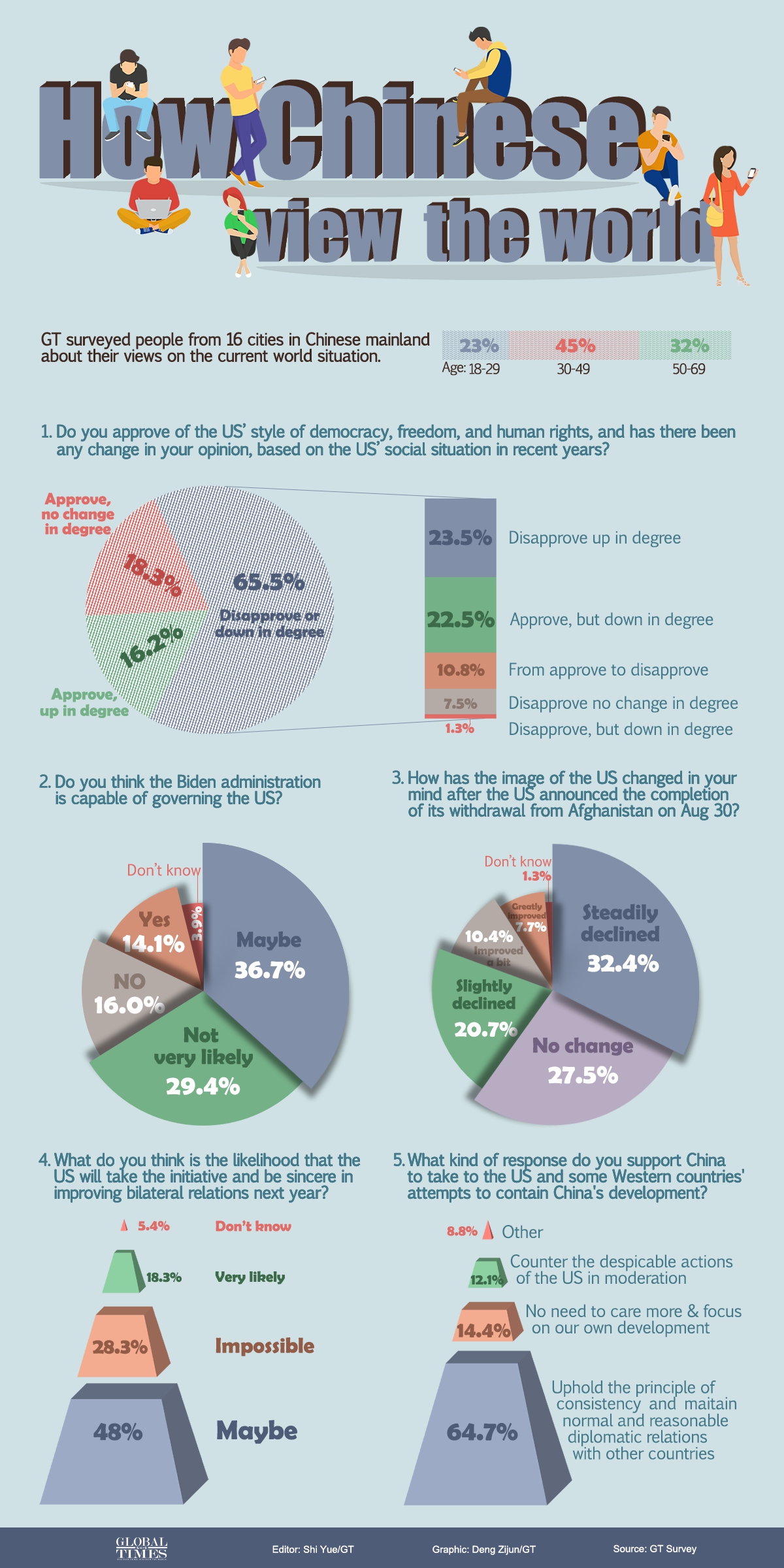 As China and Russia have been maintaining positive interactions in recent years, whether it was about personal relationship between the top leaders or diplomatic ties and economic cooperation, the two countries showed high-level of mutual trust, lifting the China-Russia relationship into a new level, Yang Jin, an associate research fellow at the Institute of Russian, Eastern European and Central Asian Studies at the Chinese Academy of Social Sciences, told the Global Times.

“On geopolitical ground, China and Russia maintained high-level cooperation, especially when they faced West-led containment on issues such as human rights and democracy, and the two countries became a major force to challenge the West-led hegemony and unilateralism at the global stage,” Yang said.

Russia extended support for China on issues related to Xinjiang, Hong Kong and the island of Taiwan, playing an active role in the Shanghai Cooperation Organization and the Belt and Road Initiative. Such high-level support and frequent interactions are behind the reason why Chinese people attach greater importance to China-Russia ties than to any other bilateral relations in this year’s survey, Yang noted.

Over the past year, China-EU relationships have become much more important amid China-US rivalry, as both China and the US need to win support from Europe, Zhou Fangyin, dean and professor of school of international relations of Guangdong University of Foreign Studies, told the Global Times.

“Meanwhile, China-EU trade relations have been further developing over the past year, and China has become EU’s largest trading partner, and all those factors help boost the significance of China-EU relationship in the eyes of the Chinese people,” Zhou said.

While the perception of foreign relations by some Chinese people has evolved over the last few years, many have also showed a changing attitude on West-defined values such as human rights, freedom and democracy. Some raised the question after US President Joe Biden took the office on January 20, 2021, on whether he would continue the Trump-era approach in exerting extreme pressure on China. Over the past year, nearly 30 percent of the respondents said they were impressed by the highly expected meeting between Chinese President Xi Jinping and Joe Biden in November. About 50 percent said they remained uncertain whether the Biden administration will take the initiative of improving China-US ties next year.

From the Capitol Hill riot at the beginning of 2021 to a chaotic withdrawal from Afghanistan to surging number of deaths and infections in the US as a result of the COVID-19 pandemic, more Chinese people have clearly seen the hypocrisy and ineffectiveness of US democracy, which led to the change in their attitude when the bubbles of “democracy and freedom” burst, some experts said.

The result showed that the US mainstream culture, which conveys a positive energy, is still welcomed by the Chinese public, but when it comes to the US government, Chinese people clearly saw the Trump administration as “having dementia” and the Biden administration as “losing the capability” in the US political system, given the chaotic performance of the former administration and the passive governance now, Lü Xiang, an expert on American affairs from the Chinese Academy of Social Sciences, told the Global Times.

“The world should understand that the Chinese people are not against the US, as some US media outlets claimed. The Chinese people do not oppose the US mainstream culture. What they really oppose is the decay and decline of the US political system,” Lü said.

Still, many Chinese people have changed their attitude toward the US government after Biden took office, as more than half of the respondents loathed the Trump administration but the number has dropped since Biden became the president.

Compared to major foreign relations such as China-Russia, China-EU and China-US ties, China-Japan relationships were considered less important for the second consecutive year in 2021 in the survey. It dropped to the fifth position in China’s most important relations with neighboring countries from the second ranking in 2019.

“This result comes as the Japanese government is cooperating with the US in taking unfriendly policies toward China, from Abe-Trump collusion to the current government, which has aroused dissatisfaction in China,” Zhou said. 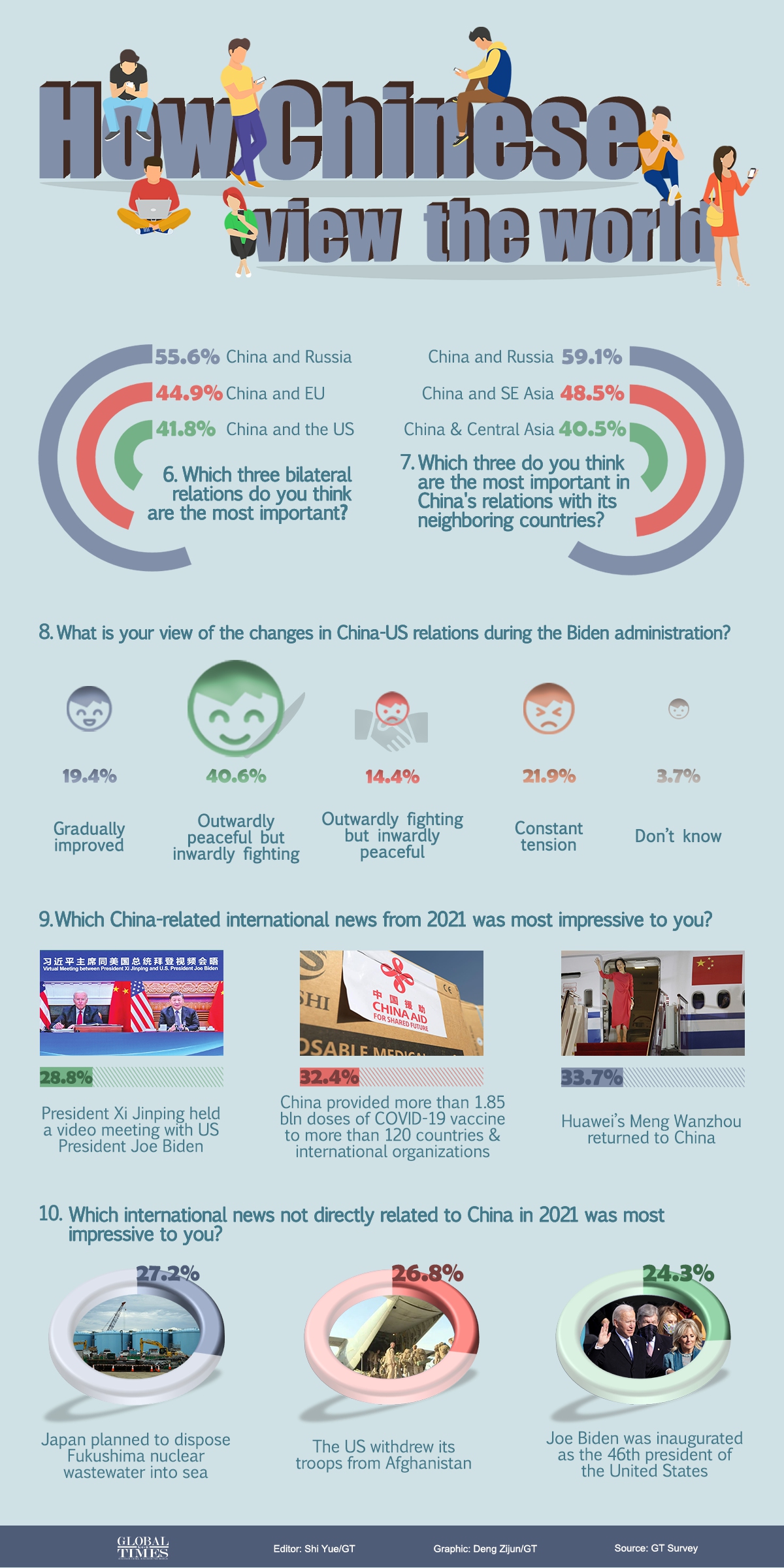 Although 2021 was not an easy year for many as new coronavirus variants continued spreading across the world, posing challenges to the world’s economic recovery, the US-led Western small clique has yet to stop containing China in spite of some breakthroughs made in the China-US relationships.

About 33.7 percent of the people surveyed considered that the return of Huawei’s CFO Meng Wanzhou to China as the most impressive event, followed by the news that China has provided over 1.85 billion doses of vaccines for more than 120 countries and international organizations, and by the virtual meeting between Xi and Biden in November.

Although Biden adopted a different approach from his predecessor in wrestling with China, the US, along with its major allies, continued imposing unilateral sanctions on China over matters related to China’s Xinjiang, Hong Kong and Taiwan. Particularly on the Taiwan question, tensions between China and the US-led West escalated to a new height in 2021. Meanwhile, the US-led summit for democracy in early December also became an anti-China ideological clique.

However, nearly 80 percent of the respondents to the Global Times annual survey hold an optimistic view on the future international environment, and among them, 26.4 percent believe the environment will become better while 52.1 percent believe that it will generally improve but conflicts will still grow.

Only 2.9 percent of the people surveyed think that the international environment will become worse, the survey showed.

“Despite tensions, many Chinese people feel confident in the future because they have seen the success and benefits of China’s development in their own lives. As a result, they feel optimistic and confident in China’s rise internationally, and have faith in the country to overcome challenges against it,” Tom Fowdy, a British political and international relations analyst, told the Global Times.

The US ultimately underestimates the determination of the Chinese people in pursuing the dream of national development. China is increasingly confident as a major power in the world, and the public mindset reflects that, Fowdy said.

Among the most favorable countries, the survey showed nearly 60 percent of respondents favor China, which has been top of the ranking since 2010. Singapore is the country where most respondents (17.1 percent) hope to visit overseas, followed by Maldives and France.

Faced with the US-led Western pressure and containment of China, 64.7 percent of the people surveyed believe that China should continue upholding its principles, maintaining normal, reasonable diplomatic relations with other countries, and 14.4 percent think that China should not care much about the containment and focus on its own development.

While the majority of respondents hold an optimistic view of global economic recovery and over 70 percent are positive on China’s recovery in 2022, about 40 percent consider that the Biden administration will not stop its rivalry with China in spite of apparently eased tensions. And 21.9 percent of respondents think the China-US relationship will continue intensifying, while only 19.4 percent consider ties will gradually improve.

However, if there are some signs of improvement, over half of the respondents expressed a willingness of taking part in people-to-people exchanges, interaction and cooperation between the world’s two largest economies.

“All these findings show that the Chinese people fully recognize the complexity of the China-US relationship, reflecting that public awareness and recognition is comprehensive, objective and rational, and extreme nationalism as well as the so-called anti-US sentiment are not a mainstream mindset in China,” Lü said.