Halle Berry recently made headlines after she made her debut as a director in the film industry with the Netflix sports drama Bruised. The actor often shares glimpses of the film and gives her fans a sneak-peek into the behind the scenes of the making of the hit project. She recently posted a clip from the film she also starred in and spread awareness about panic attacks.

The actor took to her Instagram account and shared a short clip from the film, in which her character, Jackie has a panic attack after she realises she is being thrown into a fight she does not have a chance of winning. The Academy Award-winning actor can be seen at a restaurant when she suddenly rushes to the restroom and exhibits signs of a panic attack. She can be seen struggling to breathe and feeling hot. She also extended her support to those who suffer from such panic attacks. Berry wrote, “Panic attacks are real. 11% of Americans suffer. In this scene from ‘Bruised’, Jackie has realized that she’s being thrown into a fight as a tomato can — meaning she has no real chance to win and maybe not survive. Her panic is real! My heart goes out to all of those who suffer. If you need help or want to learn more, click the link in my bio.”

Watch the scene from ‘Bruised’ here

The actor often speaks about mental health and several fans and followers resonated with her in the scene and thanked her for her support. A fan thanked the actor and director for ‘creating art that heals and helps others’, while another called the film ‘inspiring and powerful’. Netizens also hailed her for her acting in the film in the comments section of the post. 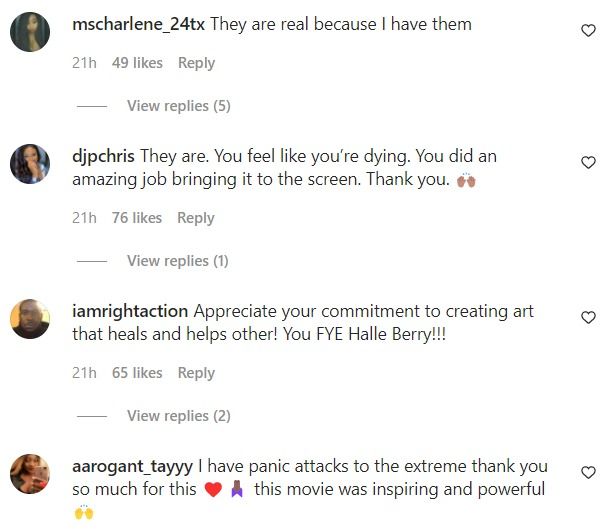 Halle Berry received heaps of love for her work in Bruised and the film recently ranked number 1 on Netflix in the USA. The news has the star over the moon and she celebrated with a victory dance. She played. E.R.’s Automatic Woman in the background and donned a black outfit as she danced to the beats of the song in joy. She wrote, “When you find out the night before that your film is #1 in the U.S. and #2 globally and you start drinking to celebrate … this is bound to happen”.

Crashed Pilot Is Pulled to Safety Seconds Before Train Plows Through

Crashed Pilot Is Pulled to Safety Seconds Before Train Plows Through