Here Is How Akshay Kumar’s “Monday” Looks Like In Maldives 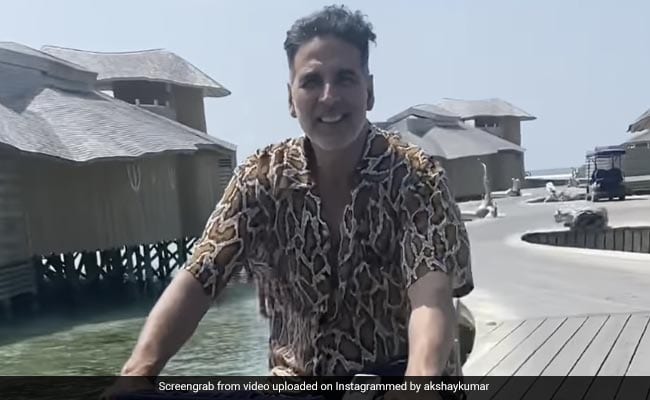 Akshay Kumar always keeps us inspired by his fitness. On Monday, Akshay shared a video on his Instagram handle. Where he can be seen enjoying his vacations in the Maldives. The actor, who has back-to-back films lined up this year, took a break for a vacation. Akshay Kumar shared an Instagram reel where can be seen enjoying cycling in the Maldives. The actor can be seen driving a cycle around a resort in the Maldives while listening to his favourite songs. Akshay Kumar also left his fans inspired by his fitness as he drove a cycle on a holiday with his family. The actor also captioned the post and wrote: “When your Monday looks like a Sunday.”

In another post from his vacation trip to Maldives, Akshay Kumar can be seen walking around with a speaker while his daughter Nitara walked by him. Sharing the Instagram reel, the actor wrote: “ये हाथों से यूँ फिसला है … हो जैसे रेत ज़रा सी  This song is playing on the loop, not just on the speaker but in my mind. Now I know what it feels like to have a song stuck in the head. Beautiful melody, beautiful feeling,” along with hashtags like #HolidayMood and #GratefulLife in his caption.

In terms of work, Akshay Kumar’s Sooryavanshi  was a blockbuster hit in November. Now, the actor is all set to release his film upcoming film Prithviraj. The film features himself along with Manushi Chhillar in the lead role. The storyline of the film is based on the Rajput King, Prithviraj Chauhan and it is directed by Dr Chandraprakash Dwivedi and backed by Yash Raj Films.

What Disney's Bob Iger thinks about the future of movie theaters

What Disney's Bob Iger thinks about the future of movie theaters