Mandy Moore Net Worth 2022: ‘This Is Us’ Salary, ‘Tangled’ Earnings

This Is Us fans may be curious to know Mandy Moore‘s net worth after her run on the beloved NBC series. After all, it pays to star as family matriarch Rebecca Pearson!

Moore—whose full name is Amanda Leigh Moore—was born on April 10, 1984, in Nashua, New Hampshire. Her mother Stacy is a former reporter who worked for the Orlando Sentinel, whereas her father Donald is a pilot for American Airlines. When Moore was still a baby, she and her family moved to a suburb right outside of Orlando, Florida because of her dad’s job. Moore was raised there alongside her siblings: She has an older brother, Scott, and a younger brother, Kyle. From a young age, Moore expressed an interest in performing and begged her parents for singing and acting lessons; clearly, it paid off.

By the time Moore was 12, the future celebrity was already starring in a handful of local productions and attending the famed Stagedoor Manor performing arts camp in New York, which saw the likes of stars such as Natalie Portman. One year later, Moore decided to start working on her own music. One day, while recording a song in a studio in Orlando, a FedEx delivery man who worked as a part-time talent scout overheard Moore singing. He later sent a copy of Moore’s unfinished demo to a friend who worked in A&R at Epic Records—a move that landed Moore her very first record deal with the label.

By 2002, Moore landed one of her most notable roles to date as Jamie Sullivan in 2002’s A Walk to Remember. The romantic drama boosted Moore’s career considerably, as she went on to star in a string of romantic comedies such as 2007’s Because I Said So and License to Wed, along with Disney films like 2010’s Tangled, where she voiced the starring character of Princess Rapunzel.

Of course, many fans today know Moore best for her role as Rebecca Pearson in the NBC family drama, This Is Us. But what many don’t know is exactly what Mandy Moore’s net worth is—and how much of it accounts for her This Is Us salary. Keep on reading below to find out.

What is Mandy Moore’s This Is Us salary? 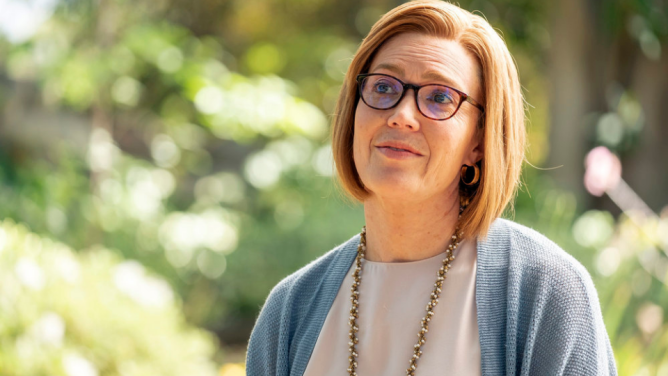 Mandy Moore has starred in NBC’s This Is Us since 2016. On the show, Moore plays Rebecca Pearson—a mother of three (affectionately known as the “Big Three”) played by Chrissy Metz, Justin Hartley and Sterling K. Brown, and wife to Jack Pearson, played by Milo Ventimiglia. The series, which takes place in the present day, showcases the Pearson family’s life through flashbacks and future scene jumps as they navigate the ups and downs of childhood to adulthood.

For her performance, Moore has received a number of award nominations and wins. Her nominations include a People’s Choice Award nomination for Favorite Actress in a New TV Series, the Golden Globe Award for Best Supporting Actress and the Primetime Emmy Award for Outstanding Lead Actress in a Drama Series. Since joining the series, Moore has won two Screen Actors Guild Awards for Outstanding Performance by an Ensemble in a Drama Series alongside her castmates.

As lovely as those awards are, Mandy Moore’s salary for This Is Us is even sweeter. So, what is Mandy Moore’s This Is Us salary? According to Deadline, Moore—along with the six other original series regulars Ventimiglia, Metz, Brown, Hartley, Susan Kelechi Watson and Chris Sullivan—were all given $2 million cash bonuses ahead of This Is Us season 6 in January 2022. In addition to this bonus, main This Is Us cast members such as Moore earn $250,000 per episode, according to The Hollywood Reporter. Altogether, this means Moore’s This Is Us salary base is $4.5 million for the entire season, with the potential for an even higher salary given that this figure is based on the cast’s 2018 contract renegotiation with NBC.

Prior to their 2018 salary bump, the This Is Us cast had varying salaries. Given that Moore was among the most well-known before starring in This Is Us, her starting salary was in the higher range of $85,000 per episode compared to castmembers like Hartley and Metz, who earned a reported $40,000.

What is Mandy Moore’s net worth?

Moore has been releasing music since 1999. At the age of 15, she dropped out of high school to focus on recording her debut album, So Real, which received a platinum certification from the RIAA. Before its release in December 1999, Moore toured with NSYNC and the Backstreet Boys. One year later, Moore released her sophomore studio album, I Wanna Be With You. The album was a hit, debuting at No. 21 on the U.S. Billboard 200 chart and landing her the Kids’ Choice Awards for Favorite Rising Star for the album in 2000. Her self-titled third studio album, Mandy Moore, was released the following year in 2001.

Moore went on to release her fourth and fifth albums in 2003 and 2007, respectively. Her 2003 record, titled Coverage, is a collection of cover songs and debuted at No. 14 on the Billboard 200 chart. Meanwhile, her fifth studio album Wild Hope debuted at No. 30 on the Billboard 200. In 2009, Moore released her sixth studio album, Amanda Leigh. The album—which is named after her full first and middle name—ended up being her last one released in over 10 years until her seventh and most recent album, Silver Landings, was released in March 2020.

This Is Us airs Tuesdays at 9 p.m. Eastern on NBC.

For more about This Is Us, check out the beloved NBC show’s official companion book, This is Us: Lessons in Life and How to Live. The book highlights heartfelt scenes from the beginning of the This Is Us journey, including over 140 pages of quotes, lessons and exclusive photos taken from season 1 to season 3 of the Golden Globe and Emmy-winning series. This Is Us: Lessons in Life and How to Live is split into six sections dedicated to loving, healing, losing, showing up, decision making and living, with thoughtful tips and examples pulled from the on-screen lives of Jack, Rebecca, Kate, Kevin and Randall Pearson. This makes the perfect gift for yourself, friends or family members who are a fan of the NBC series—especially as viewers reminisce on the show’s most memorable moments ahead of the finale.