Nick Jonas reviews Priyanka Chopra’s The Matrix Resurrections; here’s what he has to say about his wifey’s performance

Nick on his Insta story shared, “Congratulations to my amazing wife @priyankachopra and the entire cast of @thematrixmovie! What an incredible film.” In another story, he wrote, “Proud of you @priyankachopra.” Also Read – Priyanka Chopra best movies in Hollywood, which proves that she is a global icon | Watch video 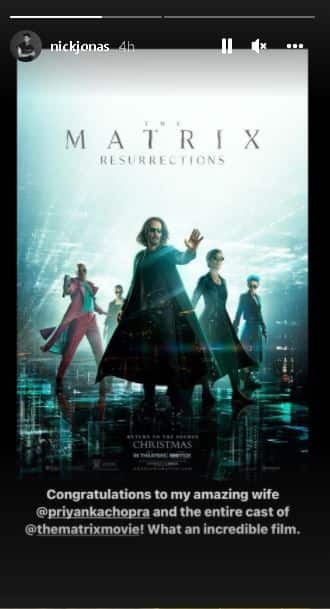 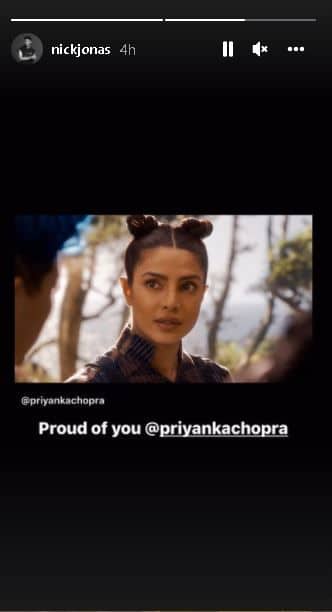 A few days ago, after watching The Matrix Resurrections, Priyanka’s mom, Madhu Chopra, had shared a note for her daughter. She posted, “Celebrating the dedication you’ve shown on the way to this achievement. You’ve earned every bit of the success. Heartfelt Congratulations and Best wishes for the launch of Matrix and all your future endeavors.”

The Matrix Resurrections is Priyanka’s fifth Hollywood film. The actress was earlier seen in Hollywood movies like Baywatch, A Kid Like Jake, Isn’t It Romantic, and We Can Be Heroes.

A few days ago, Priyanka had shared a picture from the premiere of the film, and captioned it as, “What a night! The Matrix premiere! Also @luxurylaw brought it! The colors of my dress are an ode to my character in the film, Sati. I can’t wait for all of you to meet her!! So proud of this cast and crew. What an honour. Thank you Lana. @TheMatrixMovie #MatrixResurrections.”

Talking about upcoming projects of the actress, PeeCee will be seen in movies like Text for You and Jee Le Zaraa. She also has Amazon Prime Video’s series Citadel lined up.

EXPLAINER: What caused Amazon’s outage? Will there be more?

What to look forward to in 2022, from the best TV shows and movies to street parties and huge sport events

What to look forward to in 2022, from the best TV shows and movies to street parties and huge sport events