No Way Home – The Washburn Review 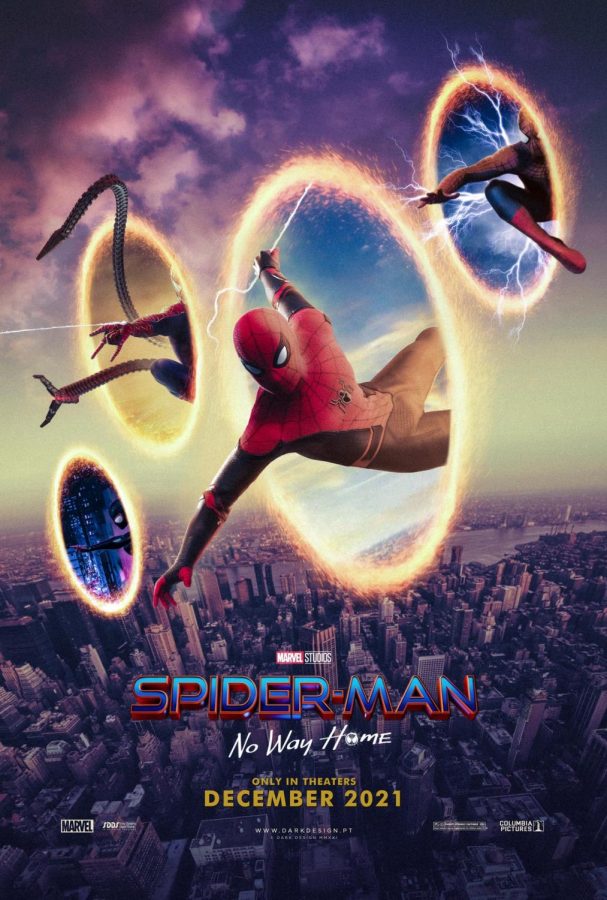 Multiple Spider-Mans emerge from portals in this poster for “Spider-Man: No Way Home.” The movie was theatrically released on Dec. 17, 2021.

Admittedly, I am new to the Marvel Universe.

The premise had me intrigued. Like other superheroes with clandestine identities, the background of the story revolves around them managing two sets of wardrobes seamlessly. To see that become unwoven, I wondered from a writing standpoint what consequences and results were about to unfold for Peter Parker.

Unfortunately, not much, other than when Parker (played by Tom Holland) arrives at school to a flock of classmates photographing him in silence. Then he whisks his girlfriend MJ (played by Zendaya) away to his bedroom, to escape the rudeness of their peers.

The comic book superhero genre often escapes my realism-based mind due to the mental gymnastics and suspension of disbelief involved with following on.

However, I do know this is a meta-conceptual movie Spidey fans will love.

Because of Hollywood rights issues, which saw the franchise split and reunite between two studios, the faithful will likely get a kick out of seeing the ways in which all three actors, known for playing the web-slinger in their particular versions of the suit, interact. It’s a sort of breaking of the fourth wall, which is an unprecedented one in cinema in my experience.

With that being said, I do think the producers missed an opportunity to explore an entire movie of the three Spider-Mans going on a sort of quest together. Instead, we see them introduced in this movie in the third act, with just enough time to explain themselves and bond over some villain-wrangling, then it’s back through space and time to their home universes.

Also, every scene is epic, deep and intense in some form or fashion, yet the characters navigate these throughout the story with nonchalant, inconsequential banter that feels like cut pieces of footage of the actors talking off-camera between takes.

The main story really revolves around Parker asking Dr. Strange to reset everyone’s memory to beforetimes when nobody knew that he was Spider-Man. Dr. Strange begins constructing a spell, but something goes wrong and villains from the previous movies emerge.

Parker is then compelled to help the villains rehabilitate their lives before sending them. It’s a real classy show of empathy.

For the reasons above, I recommend to those curious about this latest installment of the Spidey franchise to wait at home until it’s available for streaming.

A Tale of Tunisian Sisterhood – The Hollywood Reporter

New Books About Hollywood and the Art Industry

is the BBC drama based on a true story?

A Tale of Tunisian Sisterhood – The Hollywood Reporter

New Books About Hollywood and the Art Industry

The Cycle of Life and Trauma in Alex Garland’s ‘Men’