Spider-Man: No Way Home electrified cinemas over the holidays. Since its December 17 debut, fans across the globe have spent $1.4bn on tickets to watch the latest sequel in the Marvel franchise, surpassing the likes of 2018’s Black Panther in all-time box office sales.

This happened even during the rapid rise of Omicron which might have been expected to make people more reluctant to spend hours inside a room with other humans. In the US, it might have been the first time a big pandemic-era film has performed more or less as it would have before the pandemic.

So it’s a cause for optimism in Hollywood, where veterans of the movie business have been hit by a long list of challenges: an era-defining rise of streaming services; a once in a century pandemic; mega-consolidation; and executive turnover.

Sony motion pictures chief Tom Rothman was quick to declare Spider-Man an affirmation of “the unmatched cultural impact that exclusive theatrical films can have”. Perhaps no one was more happy, though, than Adam Aron, outspoken chief executive of cinema chain AMC, who wrote on Twitter: “Hey prophets of doom #CHOKEonTHAT”.

But despite the Christmas cheer, the future of the business remains existentially shaky, for a couple reasons.

First, China has retreated from its role as a big importer for US blockbusters. Amid a pandemic and chilling relations between China and the US, China’s film industry has turned inward, focusing on homegrown patriotic fare.

If not for Spider-Man’s December release, the top-selling movie of 2021 globally would have been The Battle at Lake Changjin, a film commissioned by the Communist Party of China, about the Chinese army defeating the Americans in the Korean war.

Perhaps more troubling, though, is the cratering of the US cinema industry. Moviegoing in the US has been declining for decades, although the industry has offset this by raising prices. No one knows how much the pandemic will change things but most expect the industry will never quite return to pre-Covid levels. This is bad news when the US has 40,000 cinema screens, which analysts had already viewed as too many.

But you would not know that by looking at shares in AMC, the largest cinema chain. The share price had sunk from $7 at the start of 2020 to about $2 by the end of the year as its business collapsed because of coronavirus. Aron made a series of manoeuvres to keep the lights on, raising nearly $1bn in debt and equity in January of 2021 to avoid bankruptcy.

Then, seemingly out of nowhere, shares in AMC soared. The same traders who organised on Reddit to take Gamestop “to the moon” rallied behind the ill-fated cinema chain, referring to their clan as the “AMC Apes”. The Apes sent AMC to as high as $72 a share by June. They are now back to around $25 a share, valuing the company at around $12bn.

Aron has enthusiastically encouraged the AMC Apes. He has tweeted Ape memes, including a photos of himself as “The Apefather”, donated to a gorilla charity, and organised movie screenings for the Apes.

Rich Greenfield, analyst at Lightshed, expects AMC’s share price to come back to earth. “The real sad part is people are buying the stock who can’t afford to lose the money,” he says. Aron himself sold about $35m worth of AMC stock in November and December. He attributed the sales to “estate planning”. 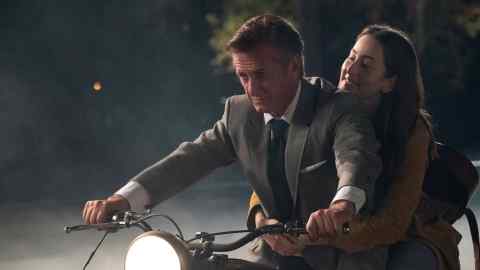 Even with the Spider-Man breakout, 2021’s US box office sales were 60 per cent lower than in 2019. Greenfield predicts that the big chains will be forced to restructure in the next 12 to 18 months and the industry will shrink to about a third of its current size — to roughly 15,000 screens in the US.

Jeffrey Bock, a longtime box office analyst, thinks that, by the end of the decade, some of the big movie studios could buy up cinemas, giving them greater control over their own product. “I could see Disney, Sony, Universal or Warner picking up some of these theatres, to take over for the struggling chains”, he says.

Perhaps this is all part of the inevitable digital future. A crypto company is currently trying to buy Blockbuster video. Twitch and YouTube are teenagers’ preferred entertainment. We’re all going to be living in the metaverse, so Mark Zuckerberg says. Even before the pandemic, it had become riskier to send a movie to the traditional cinema if it were not associated with a superhero franchise.

And streamers have stepped in, offering big cheques and creative freedom to lure the best talent towards the small screen. Maybe the future of most movies will simply be on television.

Somy Ali opens up about her relationship with Salman Khan: ‘I told him I have come to marry you’

TV tonight: Jamie-Lee O’Donnell swaps being a Derry Girl for being a Screw | Television

TV tonight: Jamie-Lee O’Donnell swaps being a Derry Girl for being a Screw | Television