What is the best Star Wars series? While Star Wars movies have long dominated the big screen, we’ve also had a steady influx of TV series based on a galaxy far, far away.

Starting as meagre tie-ins designed to sell toys in the ‘80s, televisual Star Wars has now become one of the guiding forces of the franchise. We have epic sci-fi series and drama series on Disney Plus, that both directly crossover with the main Star Wars timeline, and branch away from it. Across the prequels, sequels, and Original Trilogy, there are stories that have exhilarated and broken our hearts (and perhaps taken the sting out of a lesser film or two).

Figuring out the best Star Wars series, then, isn’t an easy question. Do we give points for presentation? Should great performances take precedent? Impact on the established Skywalker Saga shouldn’t be taken for granted, either. We’ve taken it all into account for our ranking, to tell what Star Wars shows you need to watch and rewatch, and what you can really just gloss over. 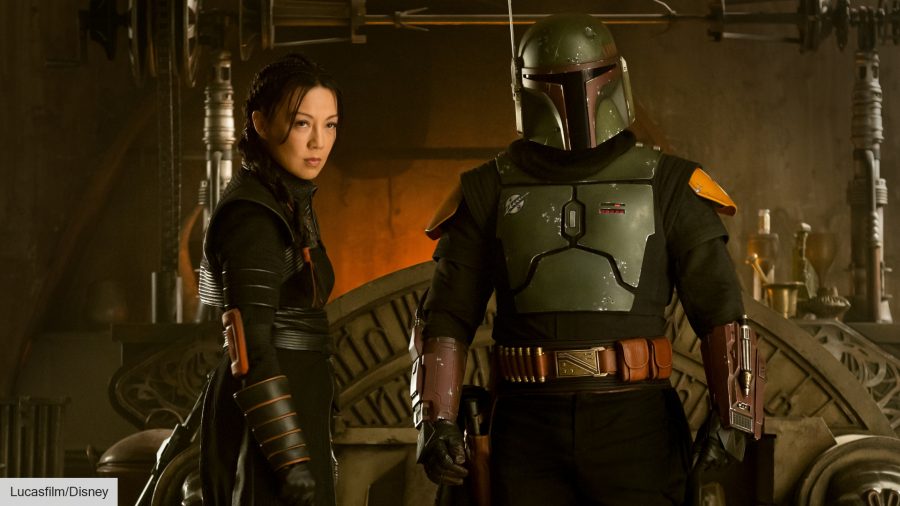 The Book of Boba Fett

Just like the namesake galactic hitman, The Book of Boba Fett is all looks, no substance. The Disney Plus series attempts a redemption story, but struggles to find any sort of clear target, becoming increasingly tedious once Boba claws his way out of the Sarlacc Pit.

What could’ve been John Wick in space is instead a convoluted way around making a silent killer, who took high-level hits from Darth Vader at the height of the Empire, into an anti-hero. Some villains need to just be villains. Temuera Morrison and Ming-Na Wen deserve better. 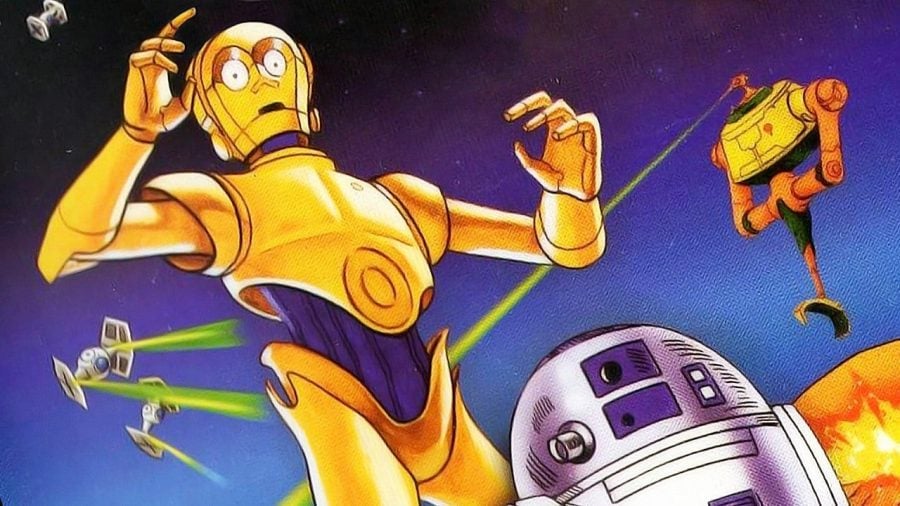 Even if you aren’t old enough to harbour nostaglia for them, the Star Wars ’80s animated series hold some charm. They were the first time a galaxy far, far away moved to the small screen, and the pulpy worldbuilding meshes well with the campiness of the era.

Droids itself is essentially a sitcom whereby R2-D2 and C-3PO move from master to master, trying to stay alive amid constant evil. You’d be hard pushed to make it fit cohesively with the franchise today, but it’s not the worst thing that bears the branding. 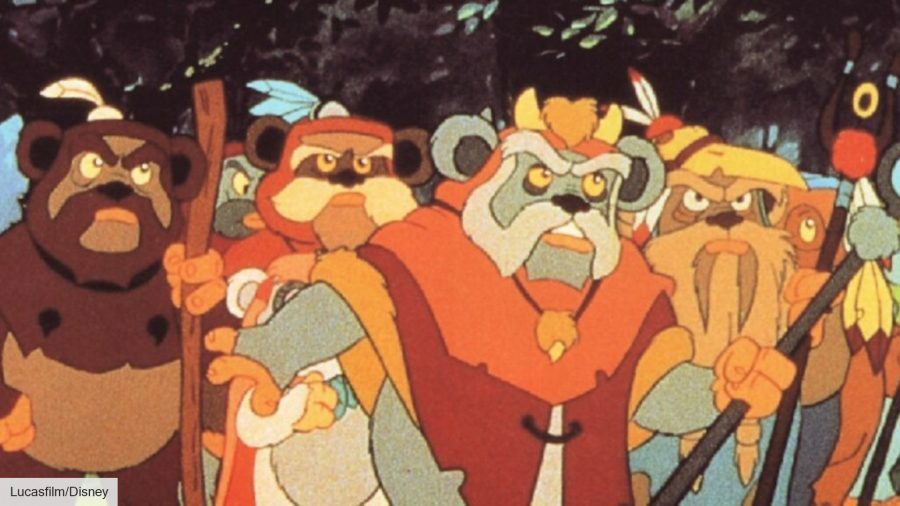 A sibling-series to Droids, Ewoks edges in quality simply due to how weird it is. Wicket, the lovable hero from Return of the Jedi, is our guide through the world of Endor, where Ewoks are under threat from Morag the Tulgah Witch, and the Duloks, a swamp-based species of furry goblins.

The Smurfs but fluffy, the drama is contained on Endor until the final episode when we almost get an appearance by the Empire himself. Crossovers weren’t so easy in those days, but you can imagine when this made Saturday mornings. 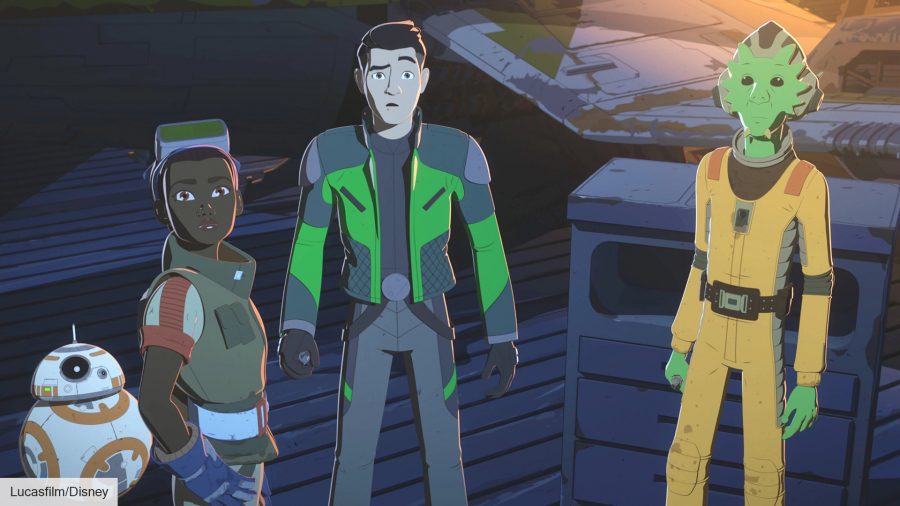 Generally, anything created by Dave Filoni for a long, long time ago is worth some time, though Resistance is the least essential of his projects. Kazudo Ziono is a resistance spy in the espionage thriller, collecting information leading up to The Force Awakens.

Resistance isn’t bad, just bland. The CG-animation is tepid, lacking any real style or vibrancy, and the range of movie stars who reprise their roles comes across as cheap novelty. Not even Gwendoline Christie and Oscar Isaac can make this totally worthwhile. 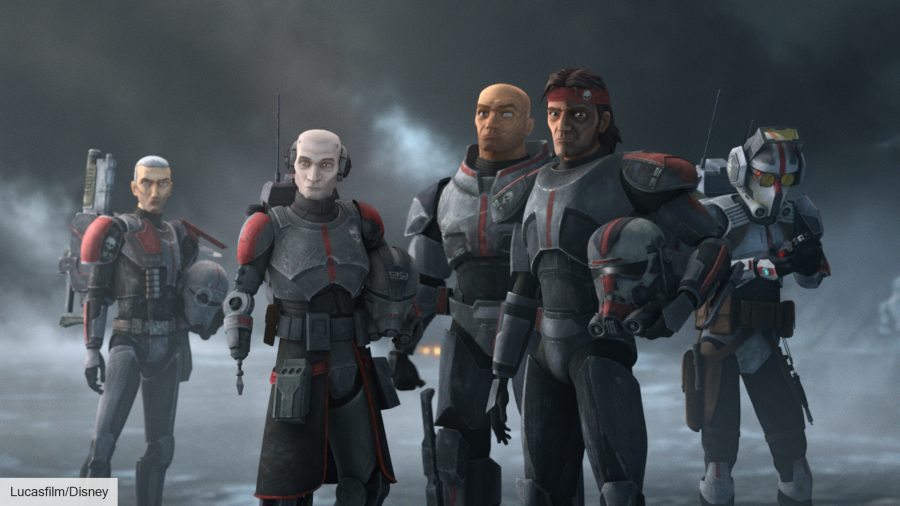 Another dull CG aesthetic is redeemed by a captivating angle on the time between Revenge of the Sith and A New Hope. When all other Clonetroopers obey Order 66 without question, a small group have the power to resist the command, making them fugitives within the galaxy at large.

Clone Force 99, all voiced by Dee Bradley Baker, make for a dynamic perspective, struck trying to redefine their own existence in the face of genocide. The first season suffer pacing issues, but it’s primed us for an exciting second. 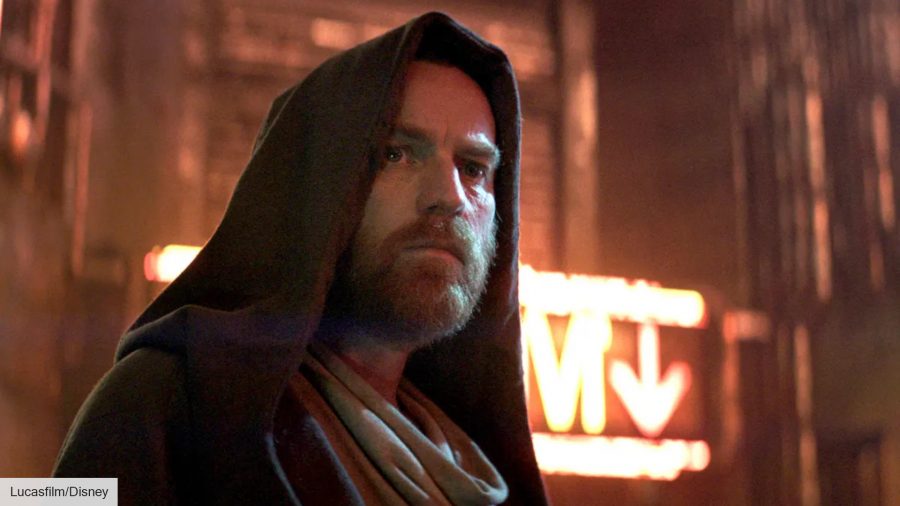 Ewan McGregor and Hayden Christensen back in Star Wars – was starting to doubt we’d ever see the day. Obi-Wan Kenobi reunites Master and Padawan for an epilogue to Revenge of the Sith that sets the stage for the Original Trilogy.

Hello there: The best romance movies

Living in exile, Obi-Wan is pushed out of hiding by the Inquisitors and Darth Vader’s hunt for the missing Skywalker children. A kidnapping plot with young Leia isn’t exactly riveting, but Inquisitor Reva’s a fine addition to the Star Wars rogues gallery. All in service of McGregor and Christensen coming face-to-face again; as heartbreaking as you’d imagine. 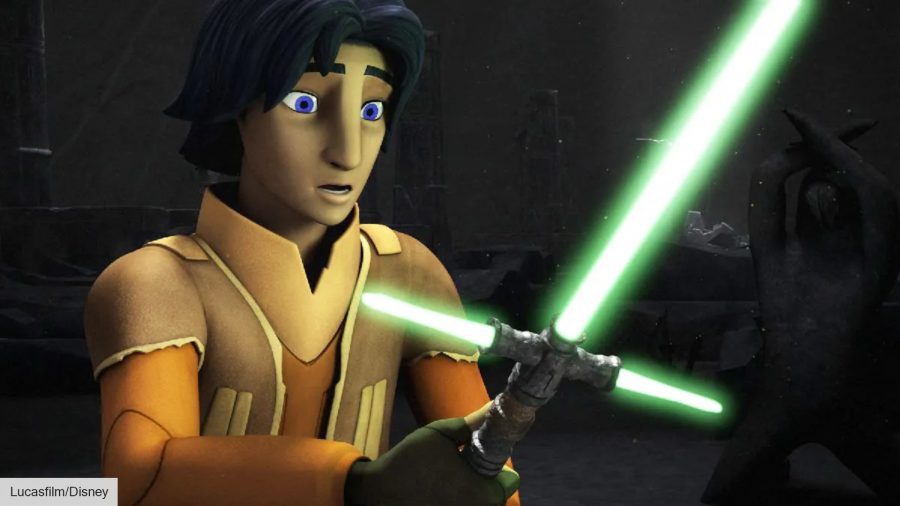 One of the key pleasures of Star Wars is watching an underdog group stick it to some space fascists. It worked for A New Hope, it worked for The Force Awakens, and it works for Rebels. The Disney Plus show could’ve just been Ezra leading the Ghost’s crew on missions and it would’ve been grand, however the way it ties into the Skywalker Saga make it incredibly satisfying.

Much of the four seasons is just the shipmates of the Ghost being a serious irritation for Imperial forces, blowing stuff up, interfering in crucial operations and such. You can sense something larger at work, and eventually it culminates in an encounter with Darth Vader that challenges time and space as we understand them in Star Wars. A chapter that’s becoming more and more crucial. 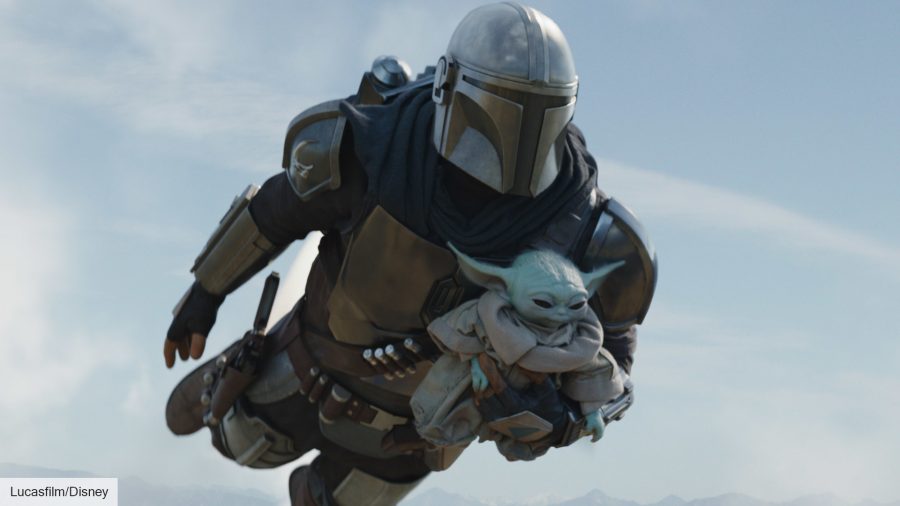 Baby Yoda. Need we say more? Star Wars in the Disney era is probably better divided by pre-Grogu and post-Grogu than movie trilogies, if merchandising and memes are anything to go by. The Mandalorian proved the franchise could exist away from the silver screen, and the Skywalkers, and still define the zeitgeist.

This is the way: The best adventure movies

The sci-fi spin on Lone Wolf and Cub, where a faceless bounty hunter is saddled with a small child prized by the Empire, has become a narrative lynchpin, Star Wars characters new and old passing through. Sometimes they threaten to overshadow the show itself, but so far Mando’s kept us focused regardless. 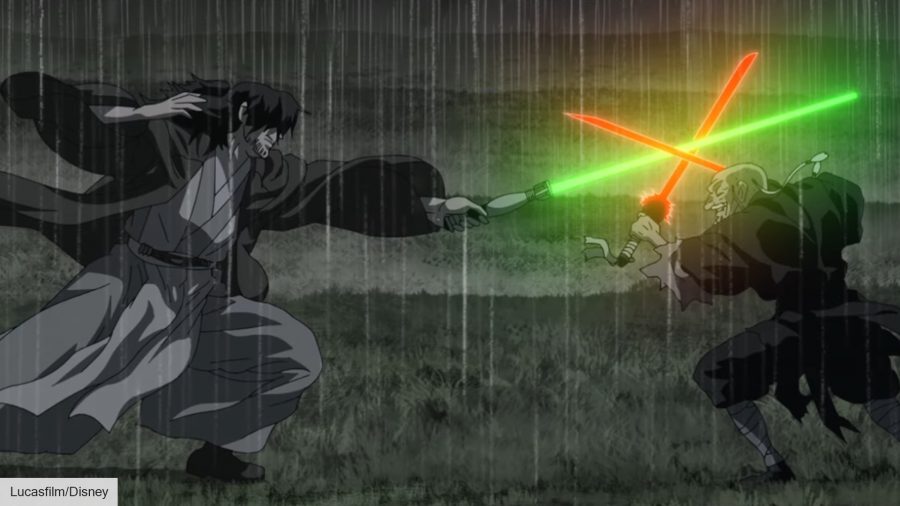 There are episodes of Visions that are among the most striking and creatively charged moments in Star Wars history. Nine anime studios were handed the franchise to remake however they like, transforming lore we’re intimately familiar with into short films that feel like wholly different galaxies.

Rabbit Force-users and stadium rock suggest it’s all in good fun, but episodes where the Jedi and Sith are shown over the course of centuries embrace a spirituality in longform that Star Wars itself has been reluctant to explore. Feels like discovering the universe all over again. 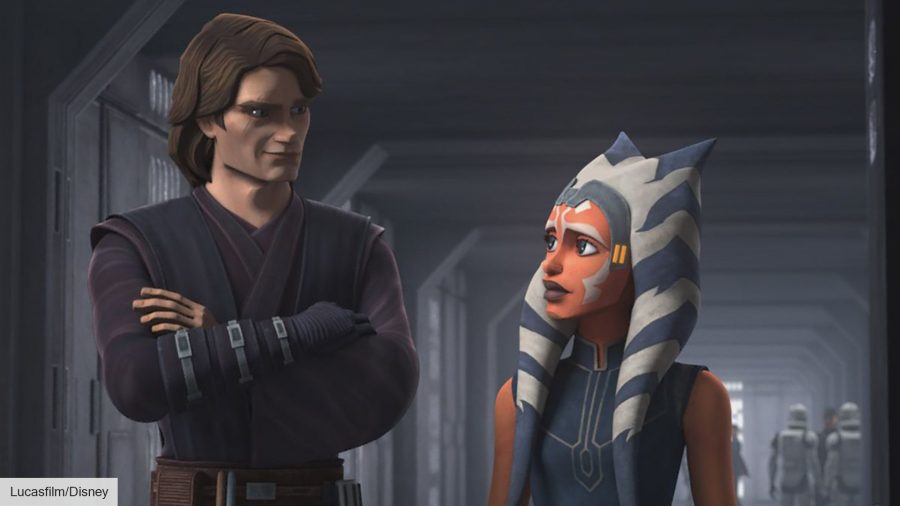 What starts as a light anthology gradually becomes a sweeping, character-driven examination of war. Obi-Wan and Anakin are at the core, fighting for the Galactic Republic side-by-side. Yoda and Mace Windu are around too, leading the Jedi in what we know is a futile effort against the Sith.

Tragic, it is: The best war movies

Star Wars may be largely defined by the cinema, but The Clone Wars is where the franchise truly breathes. The long, piecemeal arcs allow for grey areas among conflicts of the Force, questioning the constructs of the Jedi and Sith. Every pew-pew comes with the excited energy of a Saturday morning cartoon. If ever you’re disconcerted about the franchise, this is what to watch.