Strangers in a strange land- The New Indian Express

There was a time when I wanted to be a cop, a desire ignited by watching 90s cop movies of Suresh Gopi and Mammootty. Then somewhere along the way, I grew up. I learnt that real-life police work is not as glamorous and excitement-laden as those films presented. Rajeev Ravi shows, with Kuttavum Shikshayum, that he is interested in the unpolished details.

Like Unda and Nayattu before it, it shows the human side of the men in uniform. (In terms of filmmaking, however, Nayattu and Kuttavum Shikshayum did a far better job.) There is no attempt to glorify this profession. It is not, to put it simply, your grandfather’s cop movie. And Rajeev chose to open the film with a scene to drive home this point. CI Sajan Philip (Asif Ali) is still struggling with the memory of that day when he used deadly force. It was fear, we later learn, that drove him to do it.

The excuse was self-defense. However, this is not a film that shows Sajan waking up from his nightmare multiple times. Sajan is not Al Pacino from Insomnia. And it doesn’t get as grim as Nayattu because the gravity of the scenario is not that extreme. Asif plays Sajan as a practical, level-headed officer. And how nice it is to see the actor in a police uniform! 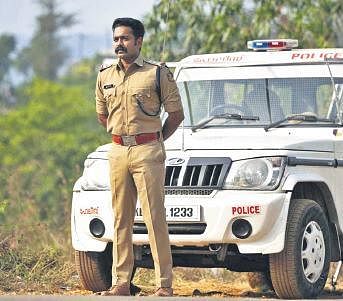 Sajan’s fears will come back once he leaves for a North Indian village to nail the culprits of a Kerala gold store robbery. He is concerned about his trigger-happy self rearing its ugly head. The scariest image in this film is of an axe-wielding woman lunging at a cop. I’m not giving away the outcome, but suffice to say that Rajeev’s intention with Kuttavum Shikshayum is not to pull off a Raid inspiration. If watching thrilling, spectacularly staged action sequences are what you hope to see, then Kuttavum Shikshayum might not be your cup of tea. It’s not Theeran Adhigaram Ondru (the vibe that some viewers got from the trailer) either.

Considering the build-up that the culprits get from the outset, one might feel slightly disappointed at how the finale plays out. For a moment, I asked, “That’s it?” but a couple of seconds later, I told myself, “Oh, right! I know what exactly they did with this film!” In a way, we are like these cops. It’s strange territory, but everything will make sense later.

I’m not painting Kuttavum Shikshayum as a dull film. Quite the contrary. What happens up until that point has an ever-present undercurrent of tension. But it’s not informed by a constantly throbbing background score. We get that from watching these men react to the situations they encounter. Some of that frustration comes from waiting a long time to get a piece of information or approval to go ahead with a nighttime raid. But these are interesting because we see actual police work: finding leads, questioning multiple informants and potential suspects, requesting help from police personnel from other states, and – this is most interesting – even bribing them to get things done in a jiffy. In the meantime, these cops sit around discussing their career-related queries, stomach issues from terrible food, and personal woes. In Hollywood, filmmakers like Paul Greengrass and Michael Mann are practitioners of this method.

When Sajan and his team are about to embark on their mission, they get a pep talk about operating on dangerous ground. A place where even the women are lethal. It’s an arid, alien space that Rajeev and cinematographer Suresh Rajan envision in extreme long shots. The portrait is of a place frozen in time, untouched by advances in technology. The residents remain cocooned in their nests until they are disturbed by the presence of the Malayali men, who are the only figures out in the open. Anything can happen. Whatever that may be, it’s just another day at work for the khaki-clad men. There is no compulsion to opt for commercial cinema gimmicks here (as seen in Kammattippadam). Kuttavum Shikshayum finds Rajeev Ravi at his most grounded.