Tara Sutaria shares a glimpse into preparations for ‘Tadap’ from three years ago; See pic

Tara Sutaria recently starred alongside Suniel Shetty’s son Ahan Shetty in the latest film Tadap. The romance drama came out to be a success for debutant Ahan Shetty and marked Tara Sutaria’s third outing in the Bollywood industry. As the film saw Tara Sutaria playing the role of a fun-loving NRI, she had to learn how to drive a jeep about three years ago in Mumbai.

Tara Sutaria recently reshared a photo of her learning how to drive a jeep in Mumbai. The picture, which was initially shared by a photographer, saw Tara Sutaria sporting a messy bun and orange goggles as she drove the jeep. Tara first reacted to the picture and thanked the photographer via the comments section. She wrote, “Thanks for making me look cool when I really wasn’t!!!” She later reshared the picture and revealed its back story. The actor wrote, “About 3 years ago! Tadap prep.. learning how to drive a Jeep around Bombay at 7 am.” 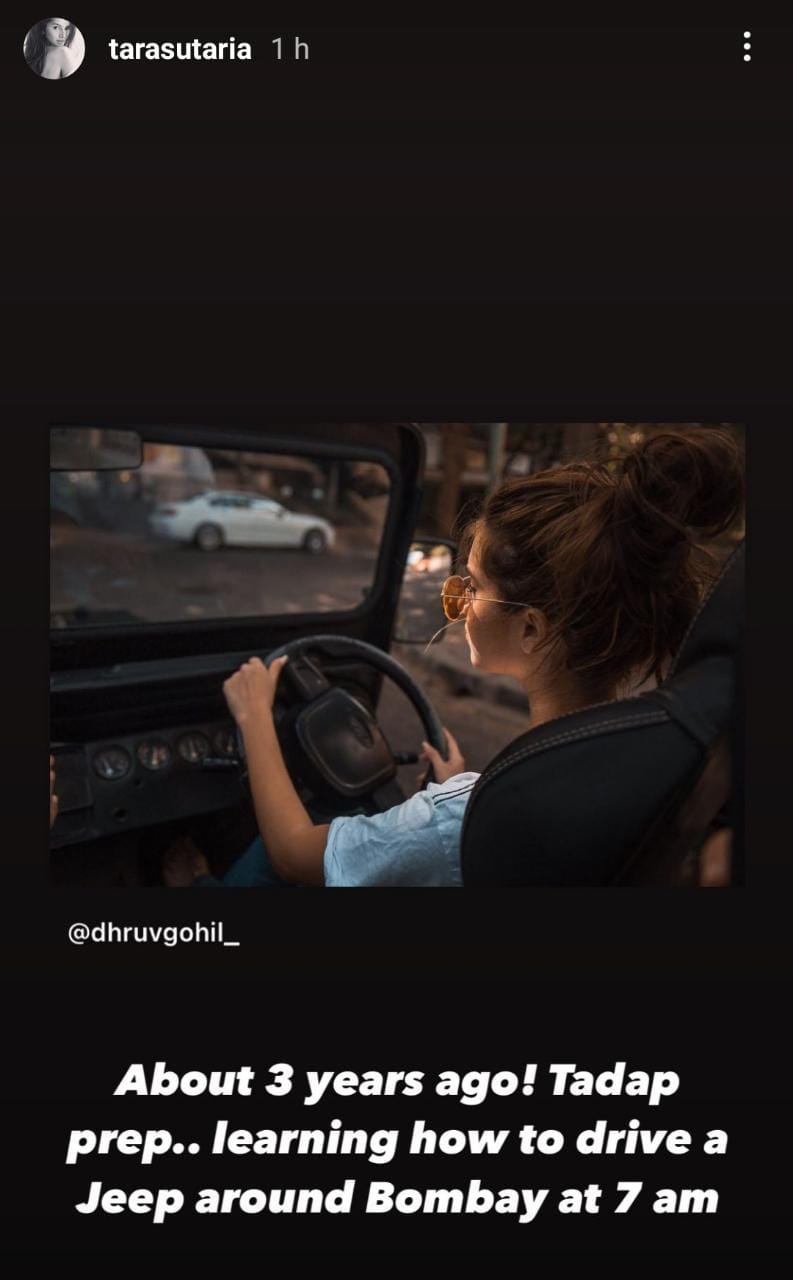 Earlier this month, the film’s production company, Nadiadwala Grandson, took to their Instagram handle to release a behind-the-scenes video of making and testing Ishana’s bike from the movie. The video also featured Ahan Shetty performing some stunts and various clips from the film. Sharing the video, the production company wrote, “The bike which accompanied Ishana through his highs and lows in Tadap! Check out what went behind making it,” in the caption.

Tadap became the talk of the town for various reasons, one of which was the makers’ decision to cast two Gen X actors – Ahan Shetty and Tara Sutaria. Another reason for it being a much-anticipated movie was its soulful music. The movie hit the silver screens on December 3 and gave a successful start to Ahan Shetty’s Bollywood journey. Despite the COVID-19 pandemic, the film performed well at the box office. According to trade analyst Taran Adarsh, Tadap crossed Rs 22 crores after one week of its theatrical run.

The film’s plot revolved around Ahan Shetty’s Ishana and US-return Ramisa, played by Tara. The two fall in love with each other after meeting in Mussoorie and plan to live together for the rest of their lives. However, Ramisa’s father does not agree with their relationship and try to break them off. It was the film’s thrilling climax that wowed the viewers.

Halsey: Having an abortion saved my life | Entertainment News

Former Black Hawk helicopter pilot Jana Tobias on posing for Pin-ups for Vets: ‘I still can't believe it's me'

Halsey: Having an abortion saved my life | Entertainment News

Former Black Hawk helicopter pilot Jana Tobias on posing for Pin-ups for Vets: ‘I still can't believe it's me'