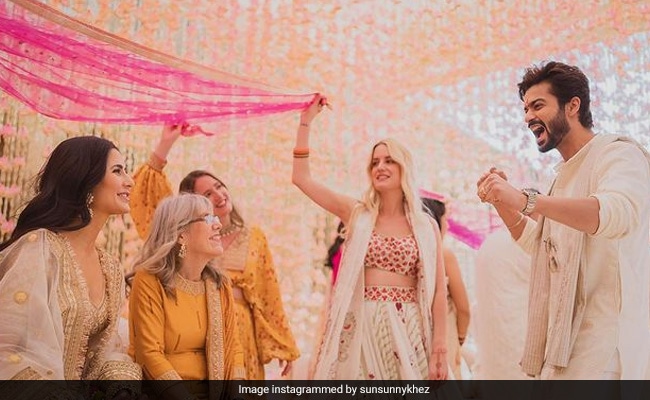 Actor Sunny Kaushal recently shared a picture of his OOTD on his Instagram profile and guess who dropped a comment on the post? His sister-in-law and actress Katrina Kaif. Sunny Kaushal captioned the pictures: “Pose like a king, dress like a warrior…” Katrina Kaif dropped a comment on it that read: “Vibe hai, vibe hai.” The comment has over 8000 likes from fans. Katrina Kaif married Sunny’s brother and National Award winning actor Vicky Kaushal in December in an intimate ceremony.

A few days ago, Sunny also shared a picture from Katrina and Vicky’s mehendi ceremony and he wrote: “Mundey waale…”

Katrina and Vicky Kaushal got married last month in Sawai Madhopur, Rajasthan. They captioned their wedding-announcement post with these words: “Only love and gratitude in our hearts for everything that brought us to this moment . Seeking all your love and blessings as we begin this new journey together.”

Sunny Kaushal started his career in entertainment industry as an assistant director. He made his debut as an actor with 2016’s Sunshine Music Tours And Travels. Sunny went on to star in Akshay Kumar’s Gold, in which he played the role of hockey player Himmat Singh. Sunny Kaushal’s next film was Bhangra Paa Le. The actor has also featured in a couple of music videos – Taaron Ke Shehar, Dil Lauta Do and Ishq Mein. He was last seen in Shiddat, opposite Radhika Madan.