Hollywood singer The Weeknd’s much-hyped fifth studio album, Dawn FM, has finally dropped online and fans are thrilled to listen to it. The 16-track LP features the hit single Take My Breath, as well as collaborations with various other singers like Tyler, the Creator Here We Go…Again and Lil Wayne for I Heard You’re Married. Other album contributors include Quincy Jones, Oneohtrix Point Never, and actor/comedian Jim Carrey, who struck up a friendship with The Weeknd over the pandemic.

The singer took to Instagram and shared a screenshot from the album and wrote, “album out now (link in bio)” Soon after the post, his fans thronged to the comment section and sent their love to the singer while tagging the new album as ‘album of the year.’ One of the users wrote, “ Thank you king for the song.” Another user wrote, “DAWN IS HERE, NO MORE DARK FOR US.” A third user chimed in and wrote, “album of the year already,” while another echoed the same sentiments and wrote, “You worked so hard on this album that was so thought out and the transitions within the songs just created a masterpiece. You amaze me every song, every album.” 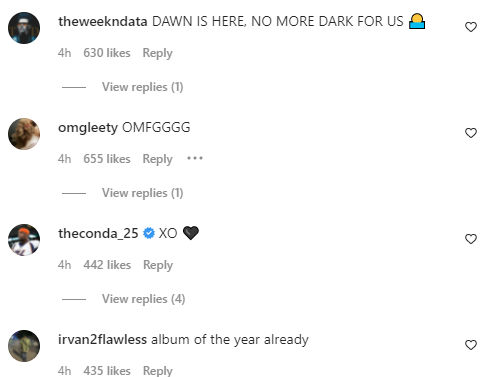 The Weeknd’s new song gets a shoutout from Justin Bieber

Singer Justin Bieber took to his Instagram stories and reposted The Weeknd’s post while expressing his fondness. To celebrate the release, The Weeknd will present 103.5 Dawn FM, a Livestream event that will air exclusively on Amazon Music’s Twitch channel and in the Amazon Music app beginning at Midnight ET/9 p.m. According to Complex portal, while discussing the event, The Weeknd said that the goal of it is to have all of his fans listen to the new music at the same time to create a truly memorable experience. “The power of the ‘103.5 Dawn FM’ experience is that maximum fulfilment comes when all who hear it are tuned in at the same time,” he explained. Ahead of the release, the singer wrote in a note teasing the album’s imminent release last week and wrote, “Music can heal and that feels more important than another album rollout. Let’s just drop the whole thing and enjoy it with the people.”

What happened to Grange Hill kids next

What happened to Grange Hill kids next