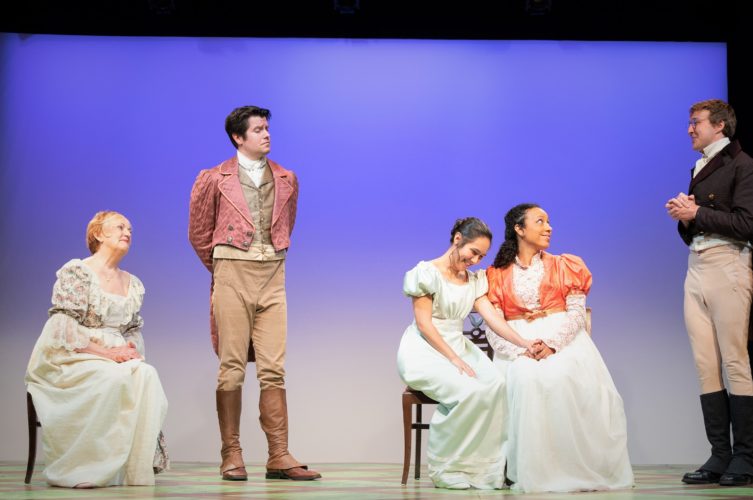 “Romance was a blood sport!”

I never expected a two and a half hour stage play with five actors based on Jane Austen’s novel, “Pride and Prejudice,” to be fun. However, that is what it is. Everyone plays two or more characters and even the actress playing the lead, Elizabeth Bennet, steps out of character to deliver narration and commentary. That is one of the things that playwright and director Daniel Elihu Kramer does with this play. The actors aren’t just playing the Austen character, they are also playing students, kids, professors, Jane Austen herself, and the narrative voice of the book.

An amazing variety of voices are heard throughout the show, normal people questioning the value of the novel, the reality of the time and the people, the meaning of words, the meaning of the relationships, what’s it all about—really. Then they answer their own questions.

Mr. and Mrs. Bennet have five daughters and a cousin, Mr. Collins, ready to inherit their home and property should Mr. Bennet die leaving the unmarried women penniless and friendless. Mrs. Bennet intends to marry them off quickly. Jane, daughter number one, falls in love with a summer visitor, Mr. Bingley, but he leaves town without declaring love or desire. Elizabeth, daughter number two, is fascinated in a bad way with Bingley’s friend, Mr. Darcy, but he is stuffy and rude and unpleasant. Collins proposes marriage to Elizabeth, which could solve their problem, but she doesn’t want to and she passes him off to her friend Charlotte, who does marry him infuriating, Mrs. Bennet. Later on, in London, misunderstood relationships begin to straighten out and things ultimately come out all right in the end. Most people have seen the 1940 movie with Laurence Olivier and Greer Garson, or the TV film or miniseries so I am not giving away much. What you haven’t seen is the clever concept that Kramer has added to the story, making the show such a splendid and joyful work.

The company in the Chester Theatre production are truly wonderful, aging, youthening, changing their voices and their posture to play the many Austen characters, including Austen herself. Claire Fort plays Jane Austen; Jane Bennet; Lydia Bennet; and the wonderfully pompous old lady who is Darcy’s imperious aunt and Collin’s mentor, Lady Catherine de Bourgh. She does well in all of her roles. Candace Barrett-Birk does very well with Mrs. Bennet and Charlotte giving each one a special voice and manner. Luke Hofmaier plays Bingley and Mr. Bennet and Darcy’s cousin, Fitz-William, with an excellent set of choices for each man. They are a wonderful company of players.

The author has staged the play on a platform on the stage using the simplest of systems, five chairs and a desk comprise the entire set. Designed by the very talented Juliana von Haubrich, it is turned, by the actors, into every location needed for the play to take on the 1813 locales. In appropriate costumes designed by Christina Beam the five players can step into and out of character as needed. Lara Dubin’s sensitive lighting is perfection indeed. There is fine original music by Alexander Sovronsky and choreography by Balinda Craig-Quiada.

Kramer knows the script well and he brings to it an almost haunted reality when the actors become real, contemporary people discussing the book and trying to understand the early nineteenth century writing and psychology. The author—Kramer—has given the director—Kramer—an interesting challenge. He keeps us engaged and nothing feels out of place.

The two leading characters, Elizabeth and Darcy, are played by terrifically engaging young actors, Marielle Young and Brian Patterson. While he sometimes is somone else, Mr. Collins for example, she is always Elizabeth Bennet. Their love story, spiked with antagonism and insult, with disinterest and desire, plays out very well as they learn who each other really are in terms of natures and motivations. Kramer—under both guises—has given them roles to play that are decisive and strong, with growth and dignnity and purpose.

In this play that both presents and attempts to explain Austen and her work at the same time as showing us her book come-to-life, we are treated to an experiment in theatrics that pays off nicely. This is a play that makes you laugh, weep, and sigh. It’s worth it, every minute.

Pride@Prejudice plays at Chester Theatre, 15 Middlefield Road, Chester, MA, through July 3. For information and tickets call 413-354-7771 or go their website.