Season 4 of Yellowstone went out with both a whimper and a bang Sunday, rustling up an emotional episode that sent one major player to the train station and another to… Sheesh, somewhere even worse, if you can imagine it. And if you read on, we’ll go over all the details.

‘YOU DON’T NEED MY PERMISSION TO LIVE HERE’ | As “Grass On the Streets and Weeds On the Rooftops” began, Beth, off her confrontation with John (relive it here), was packing up to move out in the middle of the night. Rip, cool as the proverbial cucumber, reminded her of the promise that they made to one another and warned that if she took off, her father might not be there when she came back. Hell, neither might the Yellowstone, and if it was gone, Rip would be, too. So “you break your promise to me, then it stays broken.” In response, Beth marched into John’s room to apologize for setting up Summer. “Your ranch, your rules,” she told her daddy. “I fight how you say fight.” With that, he gave the OK that she needed to have in order to continue living under his roof, even throwing in an “I love you — that never changes.” Aw, the ol’ softy. 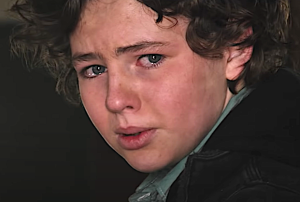 The following morning, as Beth strutted through the barn, Carter made the mistake of calling her Mama. “I just thought ’cause I don’t have one, you could be it,” he said. Mm-mm, no, she fired back. Not now and not ever. And as the poor kid dissolved into tears, she thickened the walls around her. He lost his mother, and so had she. Big whoop. “Crying doesn’t help. It never does.” From there, she piqued Rip’s interest by approaching Walker with all kindsa questions about how to sneak a weapon into prison. WTH was that about? Rip understandably wanted to know after Walker filled him in. She was planning “my last act before the kinder, gentler me appears,” she said. Look, if she needed somebody killed, Rip could take care of it, he assured her. Nope, she replied. “This one’s just for me.” At work, while Beth researched conjugal visits, Caroline stormed into her office. Having seen the Times piece on Market Equities’ airport, she was half past livid. So not only was Beth fired and, Caroline assured her, headed for the slammer, the big boss was “gonna put a public restroom where your f—king house is.” Good luck with that s—t, Caroline. More formidable foes have tried. 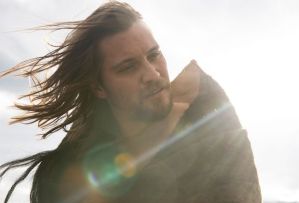 ‘THAT’S GONNA GO OVER LIKE A FART IN CHURCH’ | Waiting for his vision, Kayce spent a lot of time shivering under a cloak made of what looked like… yak? Yeti? No idea. Where’s Marlin Perkins when we need him? Over time, Kayce saw an owl, flashbacks to his time as a Navy SEAL, his late brother Lee (who grew ferocious and bloody when he was denied entry to his sibling’s protected circle), Avery (looking to get all sexypants) and, finally, a Native American girl who insisted that he knew her. (Was she the wolf? The child Monica was carrying?) “You ready to stand on the cliff?” she asked. And since he had nothing better to do than brush frost out of his beard, Kayce was like, “You betcha.” Once they were standing on that telltale precipice, he glimpsed two paths. Down the one on the left? “Oh, God.” And the right? Didn’t seem much better. What had he seen, though? When at last Mo escorted him home, Kayce admitted to Monica that “I saw the end of us.” In other words, hang in there, Avery; your time is coming. 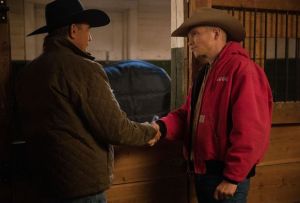 Meanwhile, Jimmy drove Metallic Cat to the Yellowstone, where he introduced Emily to the bunkhouse boys as his fiancée. Back for reasons undiscussed, Mia flew into a rage and slugged Jimmy, at which point Emily hauled off and punched Mia. And threw her against the fridge. And then some. And given that I’m not a big Mia fan, what with her almost getting Jimmy killed and all, I cheered through every second of it. When finally Mia was pulled outside, Emily endeared herself further by cracking, “Always good to exercise after a long drive.” Outside, Mia couldn’t believe that Jimmy was done with her… despite the fact that she’d told him she was done with him. “Choose — her or me,” she demanded. Wordlessly, Jimmy did just that in the no-brainer of all no-brainers. When at last Mia left with Laramie, John approached Jimmy. Impressed by what the Four Sixes had done for him, John wrote off Jimmy’s debt and promised that whether he returned to Texas with Emily or stuck around, “you always have a place right here.” 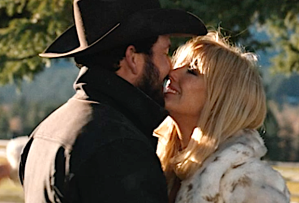 ‘HOT DAMN THAT WAS BEAUTIFUL!’ | When Beth showed up dressed to (literally) kill for her conjugal visit with Riggins, she quickly ascertained that he had met with Jamie. (Which, er, didn’t Dad ever mention that he had set in motion through Kayce? Follow up, people! Follow through!) In the end, she didn’t wind up offing the con who’d arranged the hits on herself as well as her father and brother. Instead, she just dropped lots of tasty Beth-isms like, “Your life is already over, you’re just waiting to die. I hope you wait till you’re 100.” On her way back to the Yellowstone, Beth spotted a priest and shook out her hair — apparently, an important move before kidnapping him to marry her and Rip that very day. Um, why? “There’s something that I’ve gotta do tomorrow,” she explained to her groom, John and Carter, “and I want to be a married woman when I do it.” And by God, she made it happen, despite John’s concerns about her attire, despite a delay for Rip to retrieve best man Lloyd and his mom’s ring, despite her insistence on replacing her vows with “F—k, yes, I do.” Oh, and about the abduction, it was no big deal; she’d only used a very small pistol. 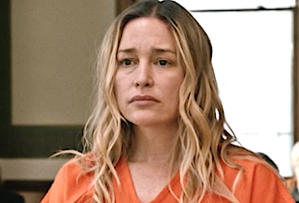 In other developments, John pleaded Summer’s case to Judge Davis, who had whatever is significantly less than zero interest in being reasonable. “She is going to prison,” he said. “The only thing to debate is how long.” Off that disheartening convo, John advised Summer to take her chances with a jury, not the judge. She did not — and wound up being sentenced to so much prison time that she wouldn’t even be eligible for parole for 14 years. Livid, John stormed into the judge’s chambers and got him to agree to lessen the sentence on appeal; Summer was still going to serve time, but now only eight months. In the judge’s eyes, he was just trying to preserve the world as they knew it. He hated to think of what it would be in a hundred years. “I don’t think we make it a hundred years,” said John, “when God starts over, tries again, if He’s got the stomach for it.” 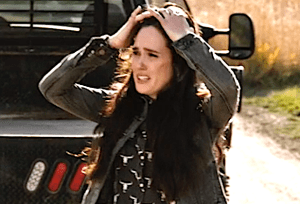 ‘COWBOYS DON’T SAY GOODBYE’ | After Jimmy wowed his old buddies with his newfound skills, Lloyd was pleased as punch. “I’ll be damned,” he exclaimed. “Look who went off and become a cowboy.” Alone with Lloyd, Jimmy expressed his desire to string together a whole mess of days that were just as sweet as this one had been — which he could do away from the Yellowstone. In Texas, he said, there’s not so much fighting. “It’s just cattle and cowboys all the way to the horizon.” So yeah, he was going back there with Emily. And I’ll call any one of you a liar who says they watched a choked-up Lloyd wish Jimmy good luck without bawling. The next day, the whole bunkhouse showed up for Jimmy’s sendoff, even Lloyd, though he couldn’t bear to say anything close to goodbye again. As John had, Rip assured Jimmy that whatever happened, he always had a place at the Yellowstone. Then, off he and Emily went… passing Mia along the way. “If you’re having second thoughts,” Emily noted, “you’re not gonna have a better chance to share ‘em.” But Jimmy didn’t have second thoughts, just maybe some regrets. 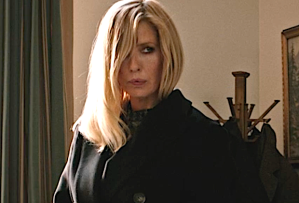 At Jamie’s office, his secretary continued to stun with her inability to form the word “Beth,” allowing him to go in blindly to meet a visitor who was, of course, Beth. “I will ruin my life today,” she announced. And it would be worth it, in her estimation, because in short order, she revealed that she’d seen Riggins and knew that Jamie had, too. It was Garrett, Jamie confessed. He hadn’t admitted it till a gun was pointed at him. Then “why,” Beth demanded, “didn’t you blow his head off?!?” It was a rhetorical question, obviously. “He just wants what you want,” she deduced. “He wants what everyone who has ever attacked us wants. He wants the land.” So she gave Jamie a couple of options: 1. Beth could have him and Garrett arrested, at which point the older man would throw his son under the bus. 2. Beth could tell Rip what Garrett did, at which point he would escort the villain to the train station, and tell her husband that Jamie’d had her sterilized, at which point he’d tear the rat bastard limb from limb. Desperate, Jamie pleaded for mercy. So Beth informed him that there was a third option. “Care to hear it?” 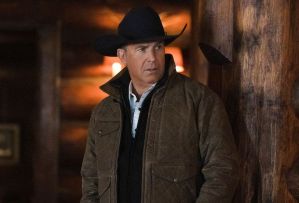 ‘I’M GOING TO SLEEP’ | Having heard option No. 3, Jamie approached Garrett as he was about to get the hell outta Dodge. “Don’t you let those f—king Duttons deceive you into thinking you’re a bad man,” he told his boy. “You’re a good man, son, and I love you.” Jamie loved Garett, too, he said. And then he shot his biodad in the head and drove his body to the train station. There — naturally! — he found Beth waiting to snap a photo of him with the stiff. “You should’ve picked options 1 or 2,” she informed him. “Three’s gonna be worse, but you’re f—king mine now.” The following morning, Beth vaguely filled in John. “Did I lose a son today?” he wanted to know. Jamie “is my greatest failure, but… ” No, Beth informed him. He still had a son, such as Jamie was. “And now you own him, too.” Afterwards, John didn’t much feel like going riding with Carter. He didn’t see the point. There was no point, the youngster reminded him. “It’s just fun.” So off they went.

What did you think of the Season 4 finale? Grade it — and the season overall — in the poll below, then hit the comments with your hopes and fears for Season 5.

Who Are The Agents Of Atlas, Rumored To Have Their Own MCU TV Series?

Who Are The Agents Of Atlas, Rumored To Have Their Own MCU TV Series?